The Transformation of NARA 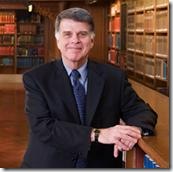 “What’s happening” is how David S. Ferriero summed up his address for me. As we found out, the list is long. Ferriero made the remarks Wednesday morning at the opening session of the National Genealogical Society’s annual conference. As head of the National Archives and Records Administration (NARA), Ferriero’s formal title is “Archivist of the United States.” AOTUS is the title of his blog.

Blogs are just one of the items on Ferriero’s long list. His is one of nine NARA blogs. “We plan to be a leader in government in the use of social media,” he said. “We’re not waiting for people to come to our web site. We’re reaching out to them with our social media activities.”

Ferriero said NARA has “28 Facebook pages for Presidential libraries and regional archives as well as individual programs and offices within the Archives. We have a YouTube site that draws on our vast collection of film and videotape of events throughout the 20th century. And you’ll find us on Flickr, where we are geo-tagging our photos when possible, and on Twitter and Foursquare.” Prologue magazine is available on iPad, iPhone, Droid, Scribd, and Zinio.

In addition to a newly designed website with genealogy portal, NARA is posting documents on www.data.gov and has launched OPA for access to born-digital government records.

After his presentation he took a few questions. “Let me start with one of the answers,” he said. “Not until they’re digitized.” Everyone laughed, as that could be the answer to so many questions. He then noted that he was speaking of the move of personnel records to St. Louis.

“We’re doing all we can to digitize our holdings as quickly as possible.” Thanks to partnerships with organizations like Ancestry.com and FamilySearch, NARA has 130 million images, many with newly created indexes. Thanks to the Federal of Genealogical Societies (FGS), pension records for the War of 1812 images are already coming online at Footnote.com and NARA websites.

NARA is digitizing the 1940 census in-house because of legal issues so that it will be ready for public availability. You won’t have to go to an affiliate website. It will be available on NARA’s. This is the first census being released in digital format only, so don’t plan on ordering microfilm.

“Will it be indexed? Sort of.” While Ferriero didn’t explain himself, I think he was speaking of the district indexes that Stephen Morse’s volunteers produced.

Ferriero said, “it is our determination to make things easier for all of you, to make genealogy research a more rewarding and fruitful experience.”

I suppose that is “what’s happening.” 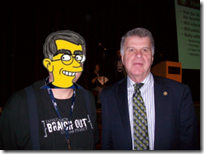 Ann Hilke gave attendees a good laugh to start the session when she welcomed us to “NGS 2011, Where the Past is Still Past.”

The NGS 2011 Conference, “Where the Past is Still Present,” continues through the rest of the week at the North Charleston Convention Center, South Carolina. Single day registration is $100. Registration open daily at 7:00am. The Exhibit Hall (Hall B,A1) is free and open to the public each day at 9:00am. Exhibit space sold out, so you will find close to 100 exhibitors and plenty to see. On Saturday, “Ancestry Day” classes, sponsored by Ancestry.com, are free and open to the public.