FamilySearch as an Archive 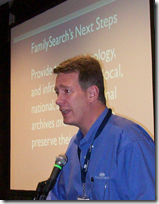 FamilySearch is digitizing, providing access, and preserving the world’s genealogical records, said Ed Donakey in a session at the NGS Conference last Thursday. Donakey is strategic relations manager for FamilySearch.

“Digital preservation is imperative for us,” Donakey said. Preserving digital records has many unique problems not suffered by microfilm preservation. The ways in which you can lose digital records is hellacious. (That’s my word, not Donakey’s… We’ll, actually, it’s not my word either. But I digress…) Failures include media failure, hardware failure, software failure, communication error, network error, hardware obsolescence, software obsolescence, operator error, natural disaster, and economic failure.

The solutions are not targeted to archivists only. “FamilySearch wants to provide the tools, technology, and infrastructure for local, national, and international archives and end users to preserve their key data,” said Donakey. “We’re doing everything we can to preserve these records for our posterity.”