I’ve written before about Ancestry.com's use of Chinese indexers. In the early days of FamilySearch Indexing I commonly heard of FamilySearch volunteers “checking” their interpretation of indecipherable names against Ancestry.com’s Chinese produced indexes. Perhaps learning to read 20,000+ Chinese characters in several different calligraphy styles leaves the Chinese workforce well qualified in figuring out a couple dozen poorly written Latin characters.

Ultimately, the more context you have, the better your ability to interpret what you’re reading. (See “Indexing Errors: Test, Check the Boxes.”)

…which is exactly why native speakers do a better job indexing unstructured text. Consider this example from Ancestry.com. Somehow I don’t think that on 27 April 1871 Miss Sophenia Bowan married “Holy Matrimany.” 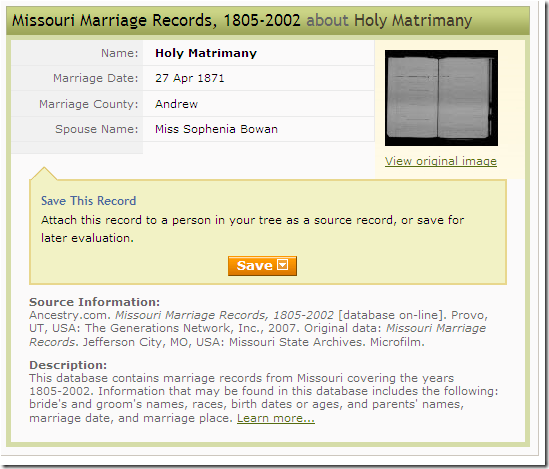 This is also why an index without images is never a good idea. If you consult the image, you will find: