“Angels Round About” - The Cokeville Miracle – #BYUFHGCON 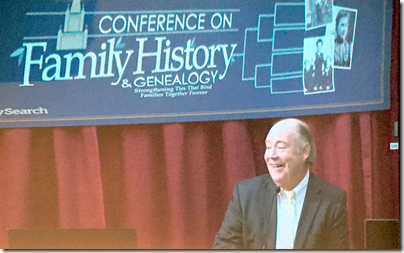 Several of the children who survived the Cokeville school bombing related having seen angels protect them.

“Most of the children that had a spiritual experience with this event identified an angel that helped them as being their ancestor,” said T. C. Christensen. T.C. gave the closing keynote, “Angels Round About,” at the 2015 BYU Conference on Family History and Genealogy. T.C. Christensen is a filmmaker whose most recent movie is the Cokeville Miracle.

The movie retells the true story of the school bombing at Cokeville, Wyoming on 16 May 1986. A madman, David Young, and wife took 136 children and 18 adults hostage at the Cokeville Elementary School. Armed with firearms and a bomb triggered to his wrist, Young demanded a ransom of two million dollars per hostage. Several hours into the standoff, Young transferred the trigger onto his wife’s wrist. She accidentally triggered the bomb, causing a massive explosion. It should have blown the entire building down. Many consider it a miracle that no one was killed, although dozens were injured. In the days that followed, the children began to tell amazing stories.

T.C. played several clips from the movie. In one clip, a young boy told his parents there were others in the room, all dressed in white. A woman told him to stand by the window and he would be okay when the bomb went off. He thought she was his grandmother who lived in a different town. Later, he identified her with a picture of his deceased Grandmother Elliot. A young girl saw a lady dressed in white who told her to go stand by the window with her brother and everything would be okay. Another girl, Katie Walker, saw angels stand between the children and the “bad guy.” Afterwards, Katie’s mother showed her a locket with a picture of her own mother who had died when she was just fifteen. Katie identified the woman in the locket as her angel. Another girl, Jennie Sorensen, said a woman helped her from the room after the bomb went off. She later identified the woman as her aunt who had died 10 years earlier. At the end of the clip, the first boy also said people, bright like light bulbs, were holding hands in a circle around the bomb. When the bomb went off, they went up through the ceiling, which investigators had determined was the main direction of the bomb blast.

“You are interested in family history?” he asked. “I can’t think of a better justification for what you are doing than the Cokeville event.”

“I’m grateful to be able to be a witness to those miracles,” she said. “There is a loving Heavenly Father that allows his angels to come back and help us in our time of need.”

She shared with us that she has had conversations with survivors of the Columbine shooting. One told her that an ancestor ran with them from the school.

Jennie Sorensen, now Jennie Johnson, was also present at the keynote. An attendee asked if she immediately recognized her angel. She said, no, she just followed her thinking she was a teacher. At one point she stopped to get her shoe. She had lost it and she was afraid her mother would be mad. The lady told her not to go back. One day while transferring photographs from a photo album, she saw the woman and asked, “When will I have that teacher?” It was then that she learned the woman was her mother’s favorite aunt who had passed away several years before.

An audience member asked if they had post traumatic stress syndrome. Katy said they did. She personally suffers from a fear of men, loud noises, and the smell of gasoline. While camping, the campfire smell can trigger nightmares. Episodes have become less frequent, but they are still there. Making and watching the film has been hard, but she thought that while hard, it has assisted healing.

T.C. was asked why people are not always saved in these incidents.

“Even In Christ’s day not every leper was healed, not every blind person was made to see. But when we see God’s hand, we should recognize it, praise and be thankful for it. And that’s what we do today in speaking of Cokeville.”