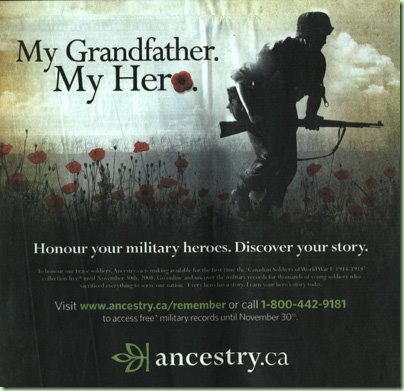 World War I ended at 11:00 am on the 11th day of the 11th month in 1918 after the Germans signed the Armistice. The following year England's King George V dedicated the anniversary of Armistice Day as a day of remembrance to those who were killed during the war. Remembrance Day continues to the present, both within the Commonwealth and without. It is even commemorated in the United States, where it is called Veterans' Day, although it shares military honors with another holiday, Memorial Day.

Remembrance Day also bears the title "Poppy Day" as a result of Canadian military physician John McCrae's poem, In Flanders Fields. On 2 May 1915 McCrae witnessed the death of his young friend and former student, Lieutenant Alexis Helmer. That night he presided at Helmer's service in the absence of a chaplain, burying his friend in a growing cemetery just outside his aid station in the complete darkness required by security.

The following day McCrae paused from his gruesome work to step outside his aid station. The station was situated at the bottom of a hill overlooking the front so that as soldiers were shot, they would roll down to his care. McCrae paused to look out over the cemetery. War had twisted and disturbed the soil across Belgium which in turn had prompted the growth of wild poppies to a degree never before seen. Crudely dug graves further prompted growth of the blood red flowers from which his morphine was derived. 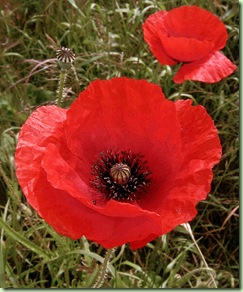 In Flanders fields the poppies blow
Between the crosses, row on row,
That mark our place; and in the sky
The larks, still bravely singing, fly
Scarce heard amid the guns below.

We are the Dead. Short days ago
We lived, felt dawn, saw sunset glow,
Loved, and were loved, and now we lie
In Flanders fields.

Take up our quarrel with the foe:
To you from failing hands we throw
The torch; be yours to hold it high.
If ye break faith with us who die
We shall not sleep, though poppies grow
In Flanders fields.

The poem quickly came to mark the sacrifice of not just Canada's dead, but all the allied dead from the Great War. It was an immediate success. However, not everyone agreed with allied recruiting's use of the fiery third stanza to incite additional young men to join their fallen comrades in Flanders fields. Today, some groups forego inclusion of the third stanza altogether.

It is within this context that Ancestry.ca ran the poppy-laden, color, half-page advertisement shown above. The ad ran in a Canadian newspaper last Remembrance Day. There was a great problem with the feel-good advertisement offering free database searches for ancestors who served in the Great War. According to a UPI story, historians quickly came forward to identify the gun-toting soldier as a German.

"I could hardly believe my eyes when I saw the picture of the German soldier," said Canadian history buff, Kevin Nikkel. It's an outrage to the memory of those who died fighting for this country." Nikkel had three uncles fight in the war.

As you read the remainder of this article, don't mistake my message. I do not condone or defend Ancestry.ca's mistake. Following the public flogging of Ancestry.ca, several interesting blog posts were published. Put prejudice aside and read on.

"I have been embarrassed about my heritage sometimes," wrote blogger Spitfire in "A different type of white guilt." She has ancestry that died on both sides of the great wars. She proudly celebrates Remembrance Day. She said, "I've learned to live with my history and heritage."

"Why is it so terrible to remember that war has casualties on both sides?" wrote Raphael Alexander of British Columbia in "Canadians have German grandparents, too." Of Canadians with ancestors that fought for the "wrong side," Alexander wrote, "Did they not also sacrifice in the war? What makes the loss of their grandparents somehow lesser?"

"Remembrance Day is a day to recall all of the soldiers who died in the struggle of global consciousness for freedom. Not just the Allies," said Alexander.

Wasn't World War I sparked by the assassination of a minor official of a minor government and fueled by nationalism? Wasn't it a war where soldiers on both sides would just as soon celebrate Christmas with the enemy in no-man's land than carry on the political machinations of government officials who directed the battlefield use of poison gas?

What was the torch and faith of the boys of Flanders fields? The dominion of Canada over Germany? Is that what McCrae had in mind? Adopting nationalism by honoring Canada's fallen above those of Germany's? Do you think that adopting the evil that led to their deaths will uphold the torch and give peaceful slumber to these fallen boys?

One of the lessons—maybe the principal lesson—of doing genealogy is learning from the mistakes of our ancestors.

And so on this, the inauguration day of Barack Hussein Obama, I ask: How do we take up this torch and these lessons and apply them to us, this inauguration day? Is it not non-partisan, non-racial respect? Yes, that seems obvious enough. So let me hit closer to home. What about good will and fair treatment of Ancestry.com by consumers mirrored by good will and the fair treatment of consumers by Ancestry.com?

As George Washington first said, "So help me God."