Spanish Is Not Dead

Last week I wrote about finding more FamilySearch content republished on Ancestry.com. (See “Ancestry.com Posts FamilySearch Microfilm.”) From among these, I wrote about using the Ancestry.com indexes for Albacete Province, Spain vital records and finding the images on FamilySearch Record Search (pilot). (See “Don’t Stop at the Index.”) I finished that article late one evening, and fearing a lengthy translation from Latin, announced, “It’s late and I’m too tired to try and read some dead language tonight.”

When I returned to the record, I fortunately asked some Spanish-speaking friends to assist. (Thanks!) That was fortunate because the records were not in Latin, but Spanish! I feel a teensy bit chagrined, but you can’t say I didn’t warn you about my lack of overseas research skills.

It’s taken nearly a week. But here’s the document with much of translated. This is a very literal translation, so don’t expect it to read well. I thought this would be more useful for those of you trying to read these records.

Click for a larger view. Did I get it right? Do you have corrections for me? 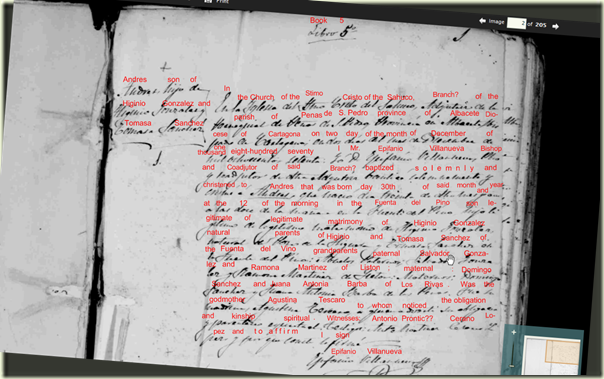 In case you find it useful, here are some words you can expect to find in these Spanish Catholic Christening records:

Once again it’s late and I’ve run out of steam. Want to provide the corresponding Spanish for the following? Click on Comments, below.