What kind of product manager designed my alarm clock?

The alarm sounds like a quarter-ton cricket. CHIRP! CHIRP!

Right next to your head, it’s effective, I assure you. There’s nothing like the sound of a gigantic arthropod in bed with you to simultaneously thrust you from bed and chase all remnants of sleepiness away. CHIRP! CHIRP!

Last night I discovered a whole new reason to despise my alarm clock’s designer. The cold, advance scouts of autumn snuck through town the other night, chilling any cricket foolish enough to stand its ground. When the scouts fell back to prepare for summer’s fall, but one cricket remained. Chirp, chirp.

Last week I looked at a preview of a developing FamilySearch technology that calculates the relationship between any two people in the new FamilySearch (NFS) Tree. I tried Orville Wright and Philo T. Farnsworth, unsuccessfully. 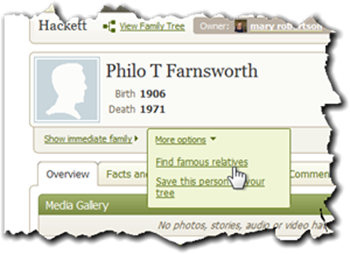 According to Famous Relatives Finder, Orville Wright and Philo T Farnsworth are 4th cousins, 4 times removed. Gosh, I hadn’t considered a closer connection than their White ancestor, but it was certainly possible.

The back-to-back failures of relationship calculators on FamilySearch and Ancestry.com, both because of garbage in their trees, was too much to handle.

All I could hear was that incessant cricket. Chirp, chirp. Product managers come and go, incessantly repeating the mistakes of their predecessors. Chirp, chirp.

Ancestral File. FamilySearch attempts to use automated matching to stitch together thousands of source-less, mistake-riddled pedigrees. As with the examples today and last week, many of the trees fail pedigree analyses so basic that even PAF would complain. Chirp chirp.

The result: Garbage in, garbage out. Chirp, chirp.

One World Tree. Ancestry.com attempts to use automated matching to stitch together thousands of source-less, mistake-ridden pedigrees. Chirp, chirp.

The result? Again, garbage in produces garbage out. Chirp, chirp.