Don Anderson at FGS: We Have the Opportunity

“We have the opportunity to do more,” said Don Anderson, senior vice president of patron and partner services at FamilySearch. Anderson spoke at a luncheon on the closing day of the annual conference of the Federation of Genealogical Societies. He made the comment in the context of the large numbers FamilySearch is producing and what still needs to be done.

FamilySearch has about 607 million images online and are adding about 500 million more a year from its microfilm collection at the Granite Mountain Records Vault. That means at the FGS conference next year FamilySearch will have more than a billion images online. The entire vault will be converted in less than six years. FamilySearch is capturing an additional 75 million a year directly from the field and not available on microfilm. FamilySearch has more than four billion indexed names online. About three billion are in historic records and about a billion are in family trees. FamilySearch has over 300 online training sessions. It has research resources in 28 countries. You can call for help 24x7, toll free from all over the world. There are over 70,000 wiki articles.

“How do we do all this?” he asked. “Nearly all of this is created by volunteers.”

Family history societies have played a large role in this. For the 1940 U.S. Census project, 434 societies helped, indexing in all 50 states.

Many societies saw something in return. “The consortium engaged in significant public relations activities,” indicated Anderson. They engaged a premier public relations firm to increase coverage of the 1940 Census. This resulted in hundreds of stories. In some instances local news media approached local societies in order to put a local face on the story. This increased exposure for societies.

Anderson played a couple of media clips illustrating this. I couldn’t find the video he played from Burbank ABC 7, but I found an article in the L.A. Times mentioning the Southern California Genealogical Society. He showed a news story that ran on St. Louis Public Radio. Ann Carter Fleming of the St. Louis Genealogical Society was one of two guests. (I don’t recall if Anderson played some of the segment or not.)

Anderson warned us before showing one of his slides. “I [show] this at the risk of being discouraging,” he said. “My intent is to be encouraging.” He then showed us the graphic below, comparing the size of the records in the vault versus what has been indexed so far. He compared these to how many new records FamilySearch is capturing each year. Finally, he showed the comparatively small size of the 1940 Census Project. 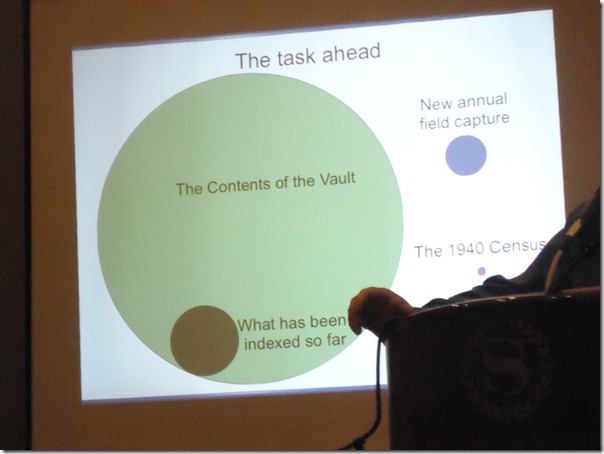 “Together we can make the world’s records available to the world.”