Chris van der Kuyl, chief executive officer of brightsolid gave the keynote presentation at this year’s annual conference of the Federation of Genealogical Societies. His presentation was titled, “The Family History Community: A Global Powerhouse for Collaboration.” The history of brightsolid and its web properties is rich in collaboration (but mostly acquisition).

One part of van der Kuyl’s presentation really impressed me. “The real power of technology is when it is unleashed to everyone,” he said. Then he told us a little bit about Jack Andraka, a fifteen year old sensation. Andraka is a high school Freshman in Maryland. He invented a way to test for viruses and antigens using a specially prepared strip of paper. His pancreatic cancer test costs $3. That is 27,000 times less expensive than existing tests.

Countering Ancestry.co.uk sponsored “Who Do You Think You Are,” brightsolid is sponsoring “FInd My Past the TV Show.” The show connects ordinary people to a significant event in the past. 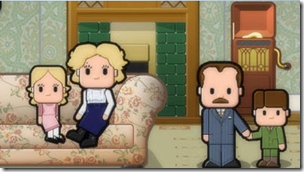 Van der Kuyl’s background is video games and brightsolid is working on one to draw in younger genealogists. “Family House” allows players to populate a house with related people. I think it allows you to furnish the house and set the appearance of the people.

(I don’t know if it is related, but brightsolid has posted a video of a different concept, “Your Family Story,” on YouTube: http://www.youtube.com/watch?v=wbxc6f_Yy_k.)

Van der Kuyl reviewed brightsolid’s values. (Also available as a YouTube video: http://www.youtube.com/watch?v=x6d51uN9M50.) “Our mission is to surpass your expectation,” he said.