David Rencher spoke at a luncheon of this year’s annual conference of the Federation of Genealogical Societies. He opened his remarks telling the story of the 2001 conference. It was the organization’s 25th anniversary. It was the Tuesday morning before the conference opened. The celebration was ready, the cake, the balloons, the door prizes.

“Then suddenly, on a beautiful promising sunny day,” said Rencher, “our lives changed as a nation and as a genealogical community.” It was the 11th of September.

“Little did we know at the time the transforming effect that single event would have on our access to genealogical records,” he said. Legislators joined in a bi-partisan effort to restrict access to records. Identity theft also became commonplace and genealogical databases quickly became a target of legislators.

The genealogical community has an organization to help fight these trends: the Records Preservation and Access Committee (RPAC). You may feel at times that RPAC is not doing all it can, but sometimes over reacting hurts a cause. RPAC takes thoughtful and effectual action. 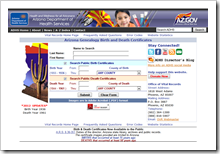 Arizona has published many
vital records online
Genealogists have experienced wins and losses since 9/11. Arizona’s online vital records is a big win. Pennsylvania is a big win where previously restricted vitals have been transferred to the state archives and can be published. The Social Security Death Index (SSDI) is in danger of being limited or being eliminated altogether. Representative Jason Chafetz of Utah is working to curtail the work of the National Historical Publications and Records Commission (NHPRC).

RPAC is monitoring these situations and acting according to reason and effectiveness. RPAC is seeking a state liaisons from each state to help it monitor and coordinate its efforts. In one existing state the representative advised RPAC to take no action, since congressmen respond best to citizens within their own state. In that particular instance, efforts at the state level successfully saved public access to a set of historical records.