Serendipity in a Box 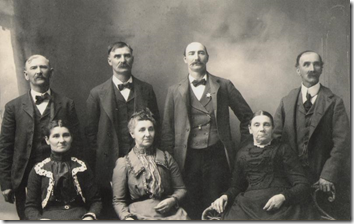 Over 40 years ago Glen and Joyce Alt lived in Platteville, Wisconsin where they became friends with Glenda Clyde and her husband. After several years, the two couples moved their separate ways, the Alts to Massachusetts, the Clydes to Washington state, and the couples had no further contact.

Years passed by. One day Glen’s parents were participating in a household auction in Dodgeville, Wisconsin. When they bought a box of stuff for a few dollars, the auctioneer threw in another for free. The Alts found the second box contained a bunch of old photographs and a piece of paper with names, dates, and places. For some reason, Glen’s mother threw them into a drawer instead of throwing them away. Eventually, she passed them on to Glen. Glen felt there must be someone out there who would place great value on the photographs, so he began investing great efforts in finding them. He had a clue. The paper identified the family as the Urens of Blanchardville, Wisconsin.

Glen started looking, but without success. When he went to Wisconsin on vacation three years later, he availed himself of the opportunity to ask around. He asked some old friends in Platteville if they knew any Urens. One remembered that they had a mutual friend whose maiden name was U’Ren: Glenda Clyde.

Twenty-eight years after they had last communicated, Glen found Glenda on social media. She thought the photographs and information might be of her family, so Glen sent the photographs and the paper to her. Glenda discovered that the pictures and paper were of her great-grandfather’s brother’s family. The information gave her seven new families and 31 new names.

“These precious pictures/paper were bought in the Midwest, given to Glen on the East Coast and then sent to me, a family member, on the West Coast,” Glenda wrote. “Considering the incredible preservation and journey of this valuable information, to us, it truly is a miracle.”