New name for GSU and FamilySearch? 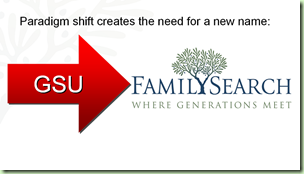 The Canadian census press release from FamilySearch received earlier this month sported a new name for the organization, "FamilySearch International," raising the possibility that FamilySearch has acted upon my August 2007 suggestions.

At last Spring's FamilySearch Developers Conference keynote speaker, Ransom Love, mentioned the problem of the many names by which FamilySearch was known and said that the organization would standardize under the umbrella of the FamilySearch brand. (See his slide, above or to the right.)

A quick check in the Utah Department of Commerce Business Entity Search did not yet show any changes to the registrations for FamilySearch or Genealogical Society of Utah but a spokesman for FamilySearch confirmed that the changes were under way. There has been no formal announcement concerning the name change nor specifics regarding how the change would be affect other brands of the organization: the Genealogical Society of Utah, the Family History Library or Personal Ancestral File.

How the change will affect the status of the organization within its parent, the Church of Jesus Christ of Latter-day Saints, has also not been made public and all issues may not have been decided yet. Currently, the organization is known as the Family History Department within the Church, reflecting a reorganization earlier this year splitting the family history and church history departments. While it is known that new identification cards for employees are forthcoming, it is not known if the cards will reflect the FamilySearch brand. Nor is it known if personnel will be employees of the Church or the new FamilySearch International.