Theoretically, one more temple went live with New FamilySearch (NFS) this week, although there has been no official acknowledgment (that I've found). Mexico City, closed for renovation, was rededicated Sunday and reopened yesterday with New FamilySearch. That brings the total number of temple districts using NFS to 107.

As I predicted, hearing nothing following the release of NFS 0.94 in August 2008 was bad news and almost certainly means that NFS is not coming to the red zone (Utah, Idaho, Vegas) in 2008. Following that release, the rumor mill fell remarkably silent. In the words of one discouraged support volunteer, tired of waiting for NFS to come to the red zone, "we missionaries can't get any more response ... than '...we don't know when.' [Even] we 'insiders' can't get the straight scoop."

While the red zone may not see NFS this year, following the usual mid-quarter release schedule for NFS, NFS 0.95 should be showing up some time soon. I checked the NFS beta website. It goes away until a new release is imminent. I found it is present, so a new release is coming! 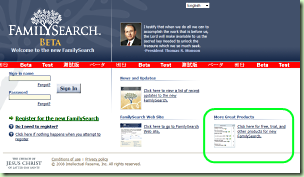 I examined the beta and found a new link on the home page. Circled in green in the screen shot to the right, there is a new icon and link that promotes 3rd party vendors that have certified products that work with NFS. I won't say anything about the page it links to, as it looks preliminary at this time.

The red band across the screen indicates that this is the beta website. This hopefully helps hapless honchos who happen onto the beta, work hours and later wonder who hijacked his family history. The link and icon to the list of recent updates brings up a document that confirms a planned November 2008 release. Since this document is available freely at a well-known URL publicly available to all, I think I can share some of the contents with you.

Be warned, however, that I am not in-the-know and the features I mention may or may not make it into the final release of NFS 0.95.

It appears that FamilySearch sponsor, the Church of Jesus Christ of Latter-day Saints is adding a step to the temple ordinance process asking Church members not to submit unauthorized names of Jewish holocaust victims. The Church member is required to read the temple submission policy and click a box indicating compliance.

The policy as stated in a recent Church press release specifies that Church members should not submit holocaust victims for temple rites "except in the very rare instances where [Jewish holocaust victims] have living descendants who are members of the Church." Helen Radkey, Church critic, reports that Church members continue to disregard this policy.

Other improvements slated for NFS 0.95 are

I have good news and I have bad news. The good news is, that after an extended draught of NFS rumors, a mailing list participant just shared a lengthy one. The bad news is.... Well..., read for yourself. Jill Crandell said,

I was in a meeting [13 November 2008] with [high ranking FamilySearch official,] Craig Miller. He indicated that the goal was to have the remaining temple districts online by the end of 2009. However, they are in "research" mode, and they can't determine how long it will take them to solve the problem of the very large records when the LDS pioneers are merged. He said they have some records where there are thousands (maybe tens of thousands) of entries for the same person. ... The roll-out is on hold for the rest of us until that problem is solved.

In the meantime, they [FamilySearch] recognize the problem of people on the Wasatch Front submitting temple work that is not being checked [for duplicate ordinances in NFS temples]. They feel that they will ... be able to update the IGI and nFS [before] they solve the [large record] problem. So, [relief is coming] for those concerned about duplication of efforts, [and] is coming sooner than we will be on the new system.