With Russians invading, we left everything 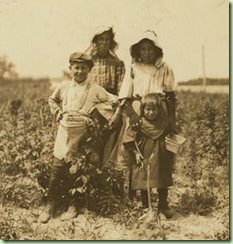 The Insider's conception of an old
photograph of a polish family of four.
Image Credit: LOC,3
Modifications © 2009, The Ancestry Insider

Thomas S. Monson, president of the Church of Jesus Christ of Latter-day Saints, last January shared an experience of genealogical serendipity in which he played a small part some years ago.2

Brother Edwin Q Cannon, Jr. … was a missionary to Germany in 1938 where he loved the people and served faithfully. At the conclusion of his mission he returned to Salt Lake City. He married and commenced his own business.

Forty years passed by. One day Brother Cannon came to my office and said he’d been “pruning his missionary photographs.” … Among those photographs he’d kept ... were several which he could not specifically identify. Every time he had planned to discard them, he’d been impressed to keep them, although he was at a loss as to why.

They were photographs taken by Brother Cannon during his mission when he served in Stettin, Germany, and were of a family—a mother, a father, a small girl, a small boy. He knew their surname was Berndt but could remember nothing more about them. He indicated that he understood there was a Berndt who was a Church leader in Germany, and he thought, although the possibility was remote, that this Berndt might have some connection with the Berndts who’d lived in Stettin and who were depicted in the photographs. Before disposing of the photos he thought he’d check with me.

I told Brother Cannon I was leaving shortly for Berlin where I anticipated that I would see Dieter Berndt, the Church leader and that I’d show the photographs to him to see if there was any relationship and if he wanted them. There was a possibility I’d also see Dieter Berndt’s sister … in Hamburg.

Amazingly, when Thomas Monson boarded the flight from Zurich, Switzerland to Berlin, one of his fellow passengers was... you guessed it... Dieter Berndt.

He sat next to me and I told him I had some old photos of people named Berndt from Stettin. I handed them to him and asked if he could identify those shown in the photographs. As he looked at them carefully, he began to weep.

He said, “Our family lived in Stettin during the war. My father was killed when an allied bomb struck the plant where he worked. Not long afterward the Russians invaded Poland and the area of Stettin. My mother took my sister and me and fled from the approaching enemy. Everything had to be left behind, including any photographs we had. Brother Monson, I am the little boy pictured in these photographs and my sister is the little girl. The man and woman are our dear parents. Until today I’ve no photographs of our childhood in Stettin or of my father.”

Edwin Cannon and Thomas Monson had experienced something not uncommonly experienced by genealogists. Little had they realized they had come into possession of the last remaining visual evidence of a couple who seemed to be calling back from the grave, saying to their children, "Remember us!"