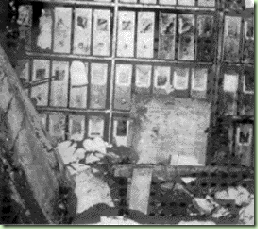 Some people think the 1890 US Federal Census perished by fire. In truth, part did. Others think it perished by water. That also is true for a portion. The cold truth is a large portion perished by ice—the cold nature of government bureaucracies and the frozen vacuum that existed prior to the establishment of an agency charged with preserving the nation's historical documents.

In the lead paragraph of a set of 1996 articles in NARA's Prologue magazine, Kellee Blake noted,

Reference sources routinely dismiss the 1890 census records as "destroyed by fire" in 1921. Examination of the records of the Bureau of Census and other federal agencies, however, reveals a far more complex tale. This is a genuine tragedy of records--played out before Congress fully established a National Archives--and eternally anguishing to researchers.

Blake described the icy depth of the tragic loss in these words:

Of the decennial population census schedules, perhaps none might have been more critical to studies of immigration, industrialization, westward migration, and characteristics of the general population than the Eleventh Census of the United States, taken in June 1890.

If you don't want me to spoil the mystery before you read the articles, stop reading now.

If you want the short summary, continue reading.

Timeline of the 1890 Census Destruction

Fire destroyed 25% of the 1890 Census. Somehow, government ineptitude destroyed the rest, the undamaged 38% and the water damaged 37% that modern technology might have been able to recover. It was a fitting irony that one arm of the government laid the cornerstone for the National Archives Building on February 20th, 1933 and the following day another arm of the government authorized the destruction of the 1890 census.