A new release of FamilySearch Family Tree has probably been released by the time you read this, so I thought I'd report what I learned about it at the FamilySearch Developers Conference.

One nice thing about covering the 2009 BYU Family History Technology Workshop live last Thursday was not having to go back and try and write an article out of my cryptic notes. Since I didn't do that for the FamilySearch Developers Conference last Wednesday, I still owe you several reports.

After lunch Tim Cross and Jason Butterfield made a presentation about FamilySearch Family Tree. Tim is the product manager and Jason is the lead engineer.

Tim mentioned that the team is thinking about making the various software components of Family Tree (developed using a computer language known as Flex) available to 3rd-party software developers. That would give 3rd-party developers a tremendous head start in producing web sites that tied into the pedigree database sometimes called Common Pedigree or New FamilySearch. 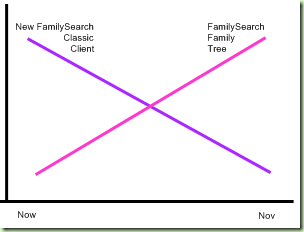 He also shared a slide with us that looked like this diagram. Tim told us that New FamilySearch, the "Classic" user interface, is used by about 20,000 different people each day, and they view about a million and three-quarter pages per day. By comparison, the new Family Tree user interface is used by very few people. One reason is that Family Tree doesn't have all the features that the Classic Client has. Tim's goal is to make using Family Tree so compelling that by November, the situation will be reversed, with most people using Family Tree and just a few still using the Classic Client.

There is an entire list of features that they know are necessary before that will happen:

Tim mentioned that after #9 is implemented, flags or push-pins on the pedigree could be used to indicate all sorts of conditions that might need your attention, such as events that need sources, or possible record matches in Record Search. (No, he didn't say "shaky leaf."

While not at this conference, Tim has been saying some new and interesting things at other conferences:

This explains the various, odd rumors going around that the Such-and-such Utah Temple is getting NFS even though family history centers and consultants aren't hearing anything about it. We had someone come into our Family History Center recently carrying cards printed from an FOR at the Provo Temple.

Remember, Jason's a programmer, so his presentation portion was more technical. He showed us the diagram below. It shows how pieces like Family Tree, Record Search, software components, and so forth fit together. 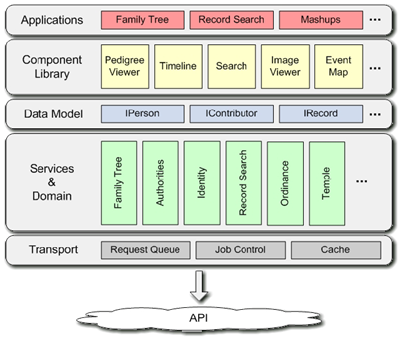 By this time I was starting to phase out. "Pillars blah, blah, ... share a common queue... blah, blah ... to call the API. This is the same API that 3rd party developers call, so we're on an equal footing."

In the question and answers, the only snippets that caught my attention were: