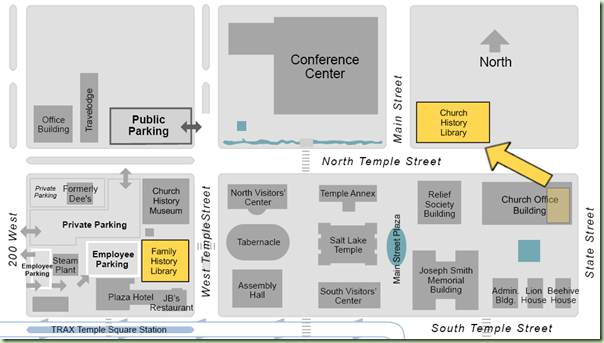 The statement reads in part,

The Church History Library has announced the following regarding its temporary closure:

One exciting new service you should try when the Church History Library reopens is imaging of select microfilm resources. Remind me in July and I'll tell you more about this service.

"The new LDS Church History Library will technically have taken even longer [than the Salt Lake Temple]—more than 48 years to build—when it opens early next year," according to Lynn Arave, Deseret News writer. The Salt Lake Temple took an incredibly long 40 years. But over 48 years ago, on 7 October 1960 the Deseret News announced a Church history archive and genealogical building to be built where the new Church History Library and Archive now stands.

The original plan for that building called for 11 stories of steel and concrete, with 400,000 square feet of space. A later plan increased the height to 15 stories. The building was to house the church historian's office, library and the archives/library of the genealogical society.

Several evolutions made a 15 story structure unnecessary. One was the adoption of high-density storage equipment. Another was the Granite Mountain Records Vault in Little Cottonwood Canyon which began service in 1963. The Vault contains about 65,000 square feet of floor space.

And this year the Church History Library and Archives moves to its new location on the site originally planned for it some 48 years ago, into a building with five stories and 230,000 square feet of floor space.