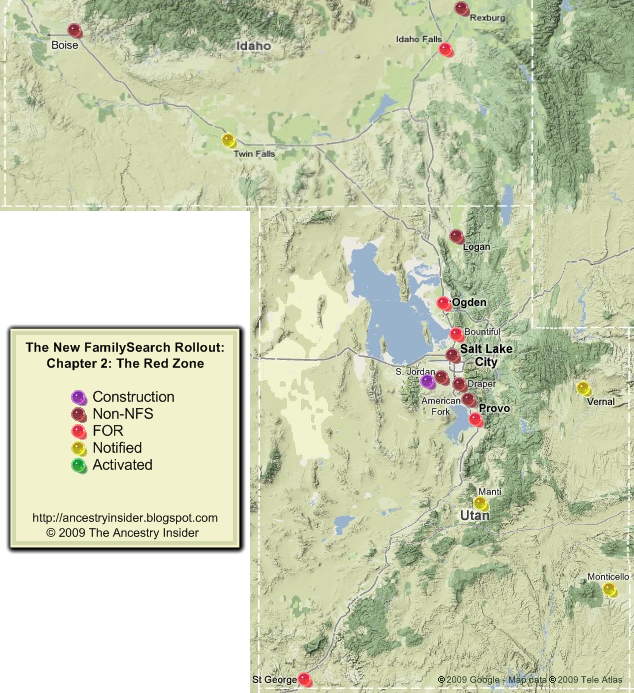 Here are the districts in transition:

I've added another category and color to the map. Pink dots indicate temples that are now equipped to accept Family Ordinance Requests (FORs). According to James W Anderson of FHCNET,

Provo has a FOR reader and card printer.  This because of all the BYU students
that have access and got it before they came here or were members in their home
wards when it rolled out.

There are a sprinkling of other temples across the Red Zone that can handle FORs. As shown on the map, they are Bountiful, St. George, Idaho Falls, Provo, and Ogden.

Anderson also reported hearing at the BYU conference that Idaho Falls received notification that they were going live, only to be un-notified. Those of you with NFS accounts can check out help center document 106609, which confirms that a memo went out on 11 March 2009 informing leaders that the notice so recently received was sent inadvertently. Poor Idaho Falls! We hope you don't become the Las Vegas of this leg of the rollout!

In other NFS news, Tim Cross has announced that he has received a change in assignment and will no longer serve as Family Tree product manager. Ron Tanner will be taking over. One of Cross's final public comments reversed information we'd previously believed. Apparently, "the rollout [will] continue to move forward [while] we are working hard to add a few more features to the Family Tree necessary before we direct 'new' patrons immediately onto it." Previously, I'd heard that Family Tree would be a pre-requisite to starting up the rollout again.

Remember, you can always see the latest NFS rollout state at "Temple Districts Using New FamilySearch." Thank's to you that are keeping me informed. Hear some new news? Let me know at AncestryInsider@gmail.com.