Keeping Up With FamilySearch

With so many things going on at FamilySearch, it's getting harder and harder to keep up with them. There used to be so many genealogy newsletters and blogs that carried their press releases, and I do this column on my own time and without recompense of any kind, so I chose to drop out of that reporting. Besides, my motivation has always been to publish the important news that Ancestry.com and FamilySearch don’t formally announce.

When the need arose earlier this week to recommend a source for FamilySearch.org press releases, a dozen blog names sprang to mind. Genealogy bloggers have evolved into a wonderful community of authors with great affection among us, so I thought it best if I devised an objective rating system.

Using that system, I’m honored to recommend Dick Eastman’s Online Genealogy Newsletter, which garnered a score of 6 out of 8. Eastman was the first to publish both of the last two press releases from FamilySearch. I’m guessing that publishing his newsletter articles is a higher priority for him than for most other bloggers, so he can do so in a timely manner. Among the blogs reviewed, Eastman was the only one that preserved the tables in the 22 July 2009 press release (see column 4 in the scoring table). And he was the only one to receive both awards, ProGenealogists 2009 Top 25 Genealogy Blogs (column 7) and Family Tree Magazine’s 2009 101 Best Web Sites (column 8). 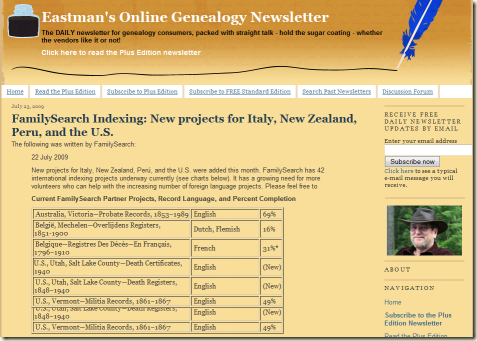 Miriam Midkiff takes both second and third place with her Eastern Washington Genealogical Society Blog and AnceStories blogs, both of which scored 5 of the possible 8 points. Midkiff was the only author that preserved the images from the 21 August 2009 press release (column 3). Eastern Washington was the only blog in the top three that got a point for including a topic link—sometimes called a tag or label—that showed all FamilySearch tagged articles (column 5). 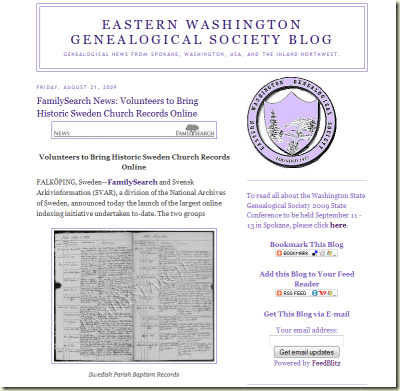 Eastern Washington Genealogical Society Blog preserved the images
in the FamilySearch press release.
Also note the clean design and easy subscription options near the top of the page.

One point was awarded for each of eight columns in the table, below. While the order in which the 21 August 2009 press release was published is given, it did not change the scoring.

For inclusion in the comparison, a blog had to be one of the first five blogs to cover one of the last two press releases (columns 1 and 2 in the table below). The top three were the only blogs to cover both (as of Saturday 22 August 2009 when I wrote this).

All of the top four blogs provide an easy e-mail subscription option (column 6) in addition to news feed subscriptions.