The National Archives and Records Administration (NARA) invites patrons to inform them of quality problems in NARA collections posted on partner websites. Send information to digitization@nara.gov . Officials point out, however, that some problems are “difficult to resolve in a seamless and timely manner.” In such situations, partners are to post advisory notices.

When these draft cards were filmed in the states of Delaware, Maryland, Pennsylvania, and West Virginia, the front of each card was photographed above the back of the previous card. For an example, the draft card for John Henry Sullivan is circled in red on the microfilm snippet, below. (For legibility I added larger frame numbers.) The front of his draft card is at the top of frame 1307 and the back is at the bottom of frame 1308.

As NARA states, Ancestry.com has posted an advisory notice in the database description and one in the record display of a registrant from one of the affected states:

Note regarding the images for the states of PA, MD, WV, and DE. These four states were scanned at the National Archives facility in such a way that the back of one person’s draft card appears on the same image as the front of the next individual. The result is that when you click to view the original image, you will see the correct front side of the draft card, but the back of the previous soldier’s card. Ancestry is aware of this problem, and is working to correct this issue.

To put it simply, if you want to see the correct back of a card, go to the next image. How could I tell which direction to go? Among the Wilmington cards after frame 1308 there are a few Kent cards. Compare the registrant's residence on the front with the draft board stamp on the back. But I digress…

To Fix or Not to Fix…

NARA says the notice is to be used when the problem can’t be fixed in a “timely manner.” I assume they expect the vendor to eventually fix the problem. Ancestry.com published this collection in May 2006. In the four years since then Ancestry.com has published billions of records. Isn’t that long enough to address this problem?

Look at Daniel Sullivan’s draft card from New York. The front of the card and the back are on separate images. Would it be so hard to do the same in Delaware?

Thumbs Up and Thumbs Down

A big green-thumbs up to Ancestry.com for keeping the frame numbers. This practice conforms with industry standards I mentioned in archive-quality digital record repository and respect des fonds.

A green-thumbs down to FamilySearch for clipping off frame numbers in their “United States, World War II Draft Registration Cards, 1942.” 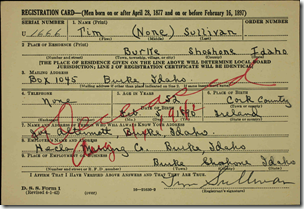 (Sorry, Tim; no disrespect intended to you or your namesake.
This was the first card I came across with a dramatic ink color.)

A tiny green-thumbs down to FamilySearch because their collection is too…  down, that is. As I write this their collection is down on the Pilot RecordSearch site and hasn’t been published yet on the Beta Familysearch.org site. But the green thumb is just a tiny bit down; pilots and betas aren’t expected to work all the time.

The issue is frame 1309 in the microfilm snippet, above. It’s missing. How do I know? Because Ancestry.com did the right thing and included frame numbers. That is the point, after all. Give users the wherewithal to independently detect errors. If you view frame frame 1308 and click to the next image, you end up at frame 1310.

Missing a frame could lead a user to associate fronts and backs that don’t belong together.

But wait. This situation is not that simple. I consulted the microfilm and found that frame 1309 is a repeat of 1308. Had Ancestry.com left in frame 1309, users might have associated the front of the green card with the back of the red card!

Their solution was to silently remove frame 1309 so fronts and backs were associated correctly. But if a user notices a frame is missing, then without an explanation and without access to the original microfilm, a user must assume that one front and one back are missing, leaving two cards compromised.

The correct solution would be to include an advisory notice on frame 1309.

Here’s my advisory notice to Ancestry.com and FamilySearch: Can you see why industry best practices are “best practices?”