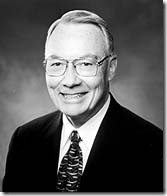 Dennis E. Simmons, immediate past president of the Family and Church History Mission at the headquarters of the Church of Jesus Christ of Latter-day Saints gave the opening keynote at the 2011 BYU Genealogy Conference. Audience members chuckled when Simmons reported hearing a genealogist call the Family History Library in Salt Lake City, Utah “the genealogist’s Disneyland.”

Simmons repeated the remarkable 1947 forecast of Archibald Bennett (secretary of the Genealogical Society of Utah) that accurately describes the objectives of the New FamilySearch Tree.

A universal system of intelligent cooperation will bring together on one record sheet every fact in existence regarding a particular family. This wealth of data will insure accuracy and banish error. Expensive and time-consuming duplications in research and repetitions in ordinances will be eliminated. No sooner will a new fact be uncovered in any part of the world by a researcher than it will be communicated to the Archives center and be assigned to its proper place, on some family record.

Simmons touched a more spiritual chord with most of his address. Like members of other faiths and philosophies, Church members experience serendipity in genealogy and Simmons shared several experienced by missionaries during his tenure. Howard Cheney, a missionary in his mission in August 2010, said, “When someone asked me what I enjoyed most about my mission experience I answer that each day I accomplished things I could not do.” In one instance a particularly difficult Spanish record rebuffed all attempts to read it. A man happened to show up and volunteer to read it. The man turned out to be a university professor who told them that the record was not in Spanish, but a pre-Spanish dialect in which he had expertise. Were it not for this extraordinary coincidence the record could not have been read.

Simmons said that family history work is full of such miracles. That is my experience as well.

Simmons address will be posted later this week on the conference website.