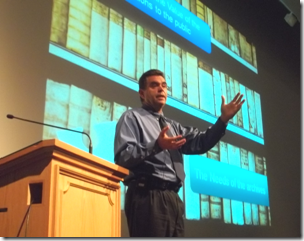 “Some of the problems that archives are facing are almost overwhelming,” said Ransom H. Love in his keynote remarks yesterday at the 2011 BYU Family History Conference. While their budgets are being slashed, they are also being asked to digitize their records. “Digitize or die,” one archivist told Love in one of the many meetings he holds with archivists in his role as senior vice president of strategic relationships at FamilySearch.

“The lack of resources is really painful in the archival community,” said Love. Georgia’s state archive has closed its doors to the public because they have no money. Volunteers can’t help; archives are down to skeleton crews too thin to manage them. Contributions can’t help; state laws prohibit accepting donations.

FamilySearch is exploring ways it can help, said Love. It can share the technology it has developed to capture, index, host, and preserve records. “It changes the whole paradigm if we can make it possible for them to host their own records.” Love said that it’s more important that the records are available than it is for FamilySearch to acquire its own copies.

Love told of several projects that FamilySearch is currently piloting. FamilySearch trained Catholic seminary students in Venezuela, the archbishop among them, who are now indexing their own records. The Guatemala government approached FamilySearch and FamilySearch provided them with technology they are now using to digitize and publish their records.

The National Archive of China has approached FamilySearch. Chinese veneration of ancestors permeates their culture and they are looking for ways to preserve the Jiāpǔ, family history records, that survived the upheavals of the Cultural Revolution. FamilySearch is a natural partner because they have the second largest collection of Jiāpǔ in the world, said Love

“There is absolutely no way that FamilySearch is going to do everything,” he said. “The only way that we’re going to do this is if we embrace the world.”

“What’s exciting is when people’s hearts are turned to their ancestors, they are better people. They come to know who they are.”