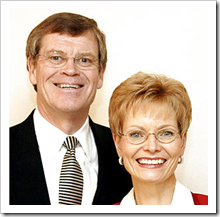 Earlier this afternoon FamilySearch International announced the appointment of Dennis Brimhall as Chief Executive Officer. Brimhall replaces Jay Verkler who has held the position for the past 10 years.

FamilySearch attributed the change to the practice of its sponsor, the Church of Jesus Christ of Latter-day Saints, to regularly rotate senior management. The change is effective in January 2012, the tenth anniversary of Verkler’s presidency.

Verkler’s presidency has been characterized by his extensive technical expertise and the unprecedented shift in FamilySearch resources towards digital technologies.

Brimhall has 38 years of not-for-profit management and leadership, primarily in healthcare. He is a graduate of Northwestern University’s Kellogg School of Management.1

Brimhall announced a focus of his presidency in his first statement to the public: “We really need to understand our customers’ needs and satisfy them. Our focus will be to ensure that FamilySearch’s customer experiences are really first rate.”

Brimhall currently lives in Englewood, Colorado2 where he works as Principle [sic] Consultant at Turning Point Health Advisors. Previous to that he was president and CEO of the University of Colorado Hospital for 17 years.

Brimhall was born in Provo, Utah to Delbert Creed and Elinor Brockbank Brimhall. His wife, Linda, is the daughter of Owen Mauss and Louise Nebeker Christensen.7

The entire text of the FamilySearch announcement is available online.