Mark Donaldson shared this tale of serendipity with me: 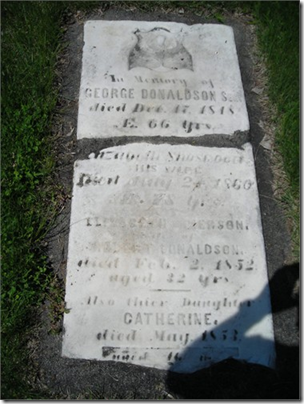 My Dad died more than 10 years ago and at his funeral we played one of his favorite songs - Louis Armstrong's -  It's a Wonderful World.

My Dad's Mother took my Dad and his brother away from the Donaldson family in Cobalt Ontario to move to Toronto when they were young - so that my Dad never knew his grandfather, whose name he had written down as Soshwood Donaldson. After my Dad died, there was no one for me to ask about the Donaldson family history and it was, at that point, all but lost. Both of my Dad's parents were born in the states (to travelling Canadian parents as it turns out), so I didn't think to look in Canada for Soshwood.

Early searches in on-line chat rooms and some physical searches at the Archives of Ontario (pre-Ancestry.ca/com) still turned up nothing. Eventually I received an email from someone living near Ottawa asking if I meant to be searching for Shos(s)wood Donaldson? (spelled Shoswood or Shosswood on various documents) After a few more emails she sent me an entire history of my Donaldson family's move from Scotland to Canada in the early 1800's and even provided me with pictures of my great-grandfather and his 5 brothers. All of a sudden, I had a family.

I drove to Buckingham Quebec from Toronto to see the town where the family had set up a homestead. As I was driving through the Gatineau Hills, listening to French radio stations - I pushed the search button on the radio and on came Louis Armstrong and - you guessed it It's a Wonderful World. The hair on the back of my neck stood up and I physically felt a chill.

I visited the area on the Lievre River, where the family farm was and 'happened' upon the Presbyterian Church graveyard in Buckingham where I felt as though I was being led to a gravesite. Sure enough, in the back corner of the cemetry was the tomestone of George Donaldson (the emigrator) and his wife Elizabeth Shosswood Donaldson.

Call it what you will…

Thanks, Mark, for sharing.