I got lots of great responses to the question, “Do you have a fix that you’d like to see on FamilySearch.com or Ancestry.com?” (See all the responses at “The Future of Family History—According to You!”) There were several threads of common thought. Here was one of them:

I agree with Unknown. My comment is in response to your second bullet point, “Return search results in the same century specified.” It should also include “same country and year range specified.”

It urks me when I ask specifically to search a certain year, place, and name, and 1,000 different years, places, and names turn up. You can do better than that, FamilySearch!

I understand your consternation. If I search for the birth record of my cousin, Lucy Sider (or Side), who was born in London, England between 1891 and 1893, I get matches in U.S. Censuses and in Ohio marriage records.

I think you’ll be happy to hear about FamilySearch’s “Restrict records by” feature. You can find it (currently) underneath the first and last names boxes: 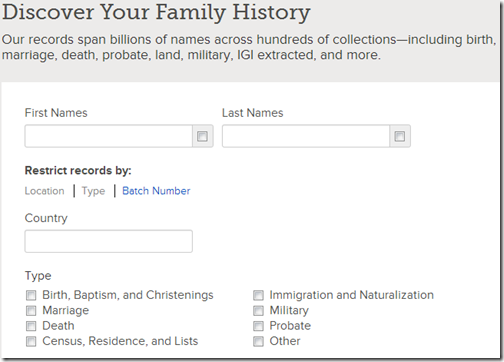 Enter “England” in the country box and you will receive matches restricted to records created in England or created about primary events in England. (If a birth record documents a birth in England, it doesn’t matter where the record was created.) In the case of my cousin Lucy, restricting the country to England cuts the matches down to four English census records.

For the United States, England, Canada, and Australia, you can restrict the location further. When you enter the country, FamilySearch provides a dropdown list from which you can select state, province, or English county. In the case of Lucy, restricting the location to London, England restricts the matches down to two census records.

The second restrict by option is record type. Where I was looking for Lucy’s birth record, I might have restricted the record type to “Birth, Baptism, and Christenings” and quickly learned that FamilySearch had no matching birth records.

As to restricting to a particular date range, I don’t know of any way to do that. Matching terms exactly does not work. However, FamilySearch.org does list the matching records first.

If anyone knows how to restrict to a particular date range, chime in.