Scan Your Books and Photographs For Free at #FGS2013

FamilySearch recently announced that the number of books they have posted online has hit 100,000! According to FamilySearch, over 100,000 is also the number of people that use its online collection each month. 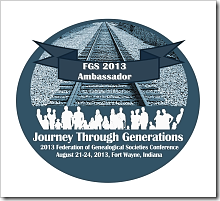 In the same announcement, FamilySearch extended an offer to FGS conference attendees and anyone else in the Fort Wayne, Indiana area to bring their genealogy books and photographs to the Allen County Public Library to be scanned for free. Said FamilySearch,

One word of caution—permission must be obtained from the author or copyright holder before copyrighted books or photos can be scanned. (Most books that were published before 1923 are in the public domain and do not require permission.)

Search the FamilySearch online genealogy library by going to FamilySearch.org, clicking Search at the top of the page, followed by Books. The majority of the books are family histories, but there are also local and county histories, cemetery records, magazines, how-to books, gazetteers, and medieval pedigrees.

FamilySearch obtained the collection by scanning its own collection as well as books from partner institutions, including the Allen County Public Library in Fort Wayne, Indiana who is also a sponsor of this year’s conference of the Federation of Genealogical Societies, also in Fort Wayne this year.

Your scanned books will be added to the online library. FamilySearch is especially interested in

Bring your books to the scanning center of the Allen County Public Library’s Genealogy Center during normal library hours, starting Monday, August 19th and running through Saturday at 3:00pm. Bring your photographs starting Wednesday, August 21st. Books can be any size, but photographs must be no larger than 8.5 x 11 inches. FamilySearch encourages you to bring your items earlier than later.

According to FamilySearch’s Rose of Sharon Gribble (yes, she’s named after the Grapes of Wrath character) the inclusion of journals and yearbooks is a recent change. Gribble made the remarks at the recent 2013 BYU Conference on Family History and Genealogy. She also said that the collection does contain some copyrighted books owned by FamilySearch. Copyrighted book can only be viewed at family history centers (FamilySearch centers). The process works like checking out a book. While you are viewing the book, no one else can view it until you are finished, said Gribble. The system identifies where the physical book is located.

Scanning is being done at the Salt Lake City Family History Library, the Allen County Public Library, Brigham Young University (BYU), BYU Idaho, the Houston Public Library, the Mid-Continent Public Library, and at FamilySearch centers in Ogden, Pocatello, Las Vegas, Mesa, Sacramento, and Orange, California. Expansion is planned domestically and internationally, including the British Isles next year, said Gribble. They also plan to increase the size of their non-English collection. If I understood correctly, FamilySearch has started using scanners supplied by the Internet Archive, operating them by FamilySearch volunteers. FamilySearch is adding about 1,000 books each week, according to Gribble.

The project was launched in 2004. BYU provided the website, support, and expertise, said Gribble. iArchives, former footnote.com owner provided something, but I didn’t quite understand what. After a two year pilot, they decided to continue the program. The collection became the most used archive in the BYU online collection. In 2010 they had 17,700 books online and reached the capacity of the BYU systems. On February 1st, 2012, they launched the current site on FamilySearch.org.