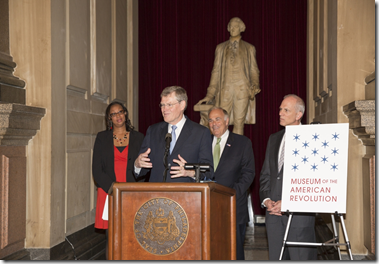 Dennis Brimhall, president and CEO of FamilySearch International, last week presented a check of $1.5 million dollars to the Museum of the American Revolution (MoAR). He did so on behalf of FamilySearch sponsor, the Church of Jesus Christ of Latter-day Saints. The museum is being built in the historic heart of Philadelphia and is set to open in 2016. The gift boosted funds raised on the $150 million project to over $100 million.

“The story of America’s founding is one of faith, family, and religious freedom,” said Brimhall. “The Church is pleased to be a partner in the ongoing efforts to engage people in their heritage in inspiring, immersive, and interactive ways.”

The museum will include one of the new FamilySearch “Discovery Centers” announced at last year’s FGS conference. (See “Über Cool Family History Center of the Future Shown at #FGS2013.”) According to FamilySearch’s Merrill White, “the Family Discovery Center offers individuals and families simple yet powerful in-person experiences to discover their heritage and have their hearts turned to their ancestors.”