Each year I try to take off the month of December (from blogging). You’re busy. I’m busy. We’re both busy. But before I go, it’s time to catch up.

RootsTech 2016 has announced to members of the Church of Jesus Christ of Latter-day Saints that Family Discovery Day 2016 will feature newly called apostle, Elder Dale G. Renlund of the Quorum of the Twelve Apostles and his wife, Ruth. Other speakers include Rosemary M. Wixom, Primary general president and Stephen W. Owen, Young Men general president. 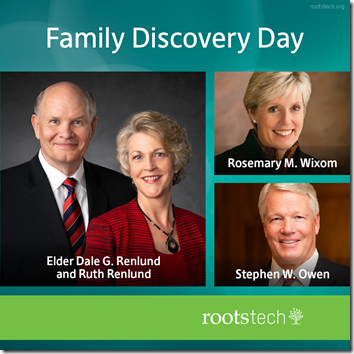 To speed the publication of newly scanned microfilm, FamilySearch has released a new feature. Soon after scanning a roll of microfilm, FamilySearch will show a camera icon next to the film number in the catalog. Click the icon to see the images from the film. Since films will be published before FamilySearch has added waypoints to facilitate browsing the images, FamilySearch has also implemented a thumbnail view. This allows quick visual identification of volume covers, indexes, probate packets, and the like. Catalog icons also allow searching a single film (once indexed) and ordering the roll for viewing in a local FamilySearch center. Digitized films will not appear in the list of historical record collections until after they have been waypointed, so be certain to check the catalog if you don’t find a collection you need in the collection list. (I’m a big proponent of the catalog. The collection list can’t scale to tens of thousands of collections.)

As before, some images are restricted. Restrictions vary. At their simplest, you must sign in before being granted access. However, many restricted images are viewable only at a FamilySearch family history center unless you are a member of the Church of Jesus Christ of Latter-day Saints. For more information, see “News Flash! Digitized Microfilm: From the Drawer to Your Computer” on the FamilySearch blog.

FamilySearch recently announced they are revamping the Memories section of their website. They are adding a Gallery that enhances the ability to add, organize, and view photos, stories, documents, and audio recordings. For more information, see “Coming to FamilySearch! A Memories Gallery to Enrich Your Family Tree” on the FamilySearch blog. 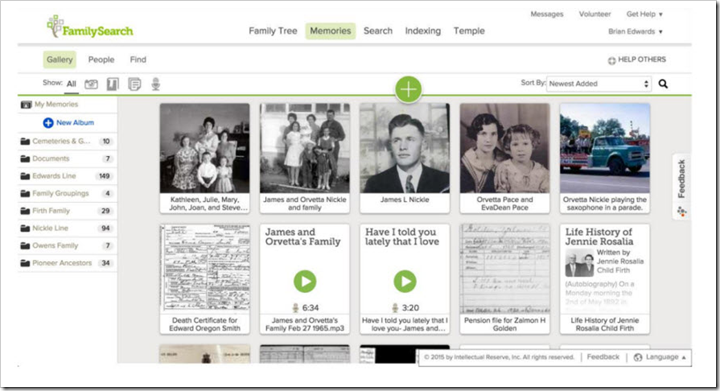 Ancestry announced the results of their annual Find a Grave Community Weekend. Hundreds of volunteers worked in upwards of 70 cemeteries. They

Congratulations and thank you, everyone. For more information, see “Members Fulfill 10,000 Photo Requests During Find a Grave Community Weekend” on the Ancestry Blog.

You know I needed to write a catch-up article when you see news items that are weeks old. I don’t recall ever pointing out the user-to-user messaging system FamilySearch introduced back in August. One of the most frustrating aspects of a collaborative tree such as FamilySearch Family Tree has been the inability to collaborate with users who chose not to make their email addresses accessible. There’s nothing like someone messing up your tree and having no way to discuss with them their changes. Now users can send messages to other users without using email. For more information, see “FamilySearch Messaging on FamilySearch.org” on the FamilySearch blog. To read about features released in October, see “What’s New on FamilySearch—November, 2015.”

RootsTech has announced that Pulitzer Prize winner Doris Kerns Goodwin will be the keynote speaker at RootsTech 2016 on Saturday, 6 February at the Salt Palace Convention Center in Salt Lake City, Utah. Steven Spielberg based the movie Lincoln, in part on her book Team of Rivals: The Political Genius of Abraham Lincoln. She received her Pulitzer Prize in 1995 for No Ordinary Time: Franklin and Eleanor Roosevelt: The Home Front in World War II. She’s also authored biographies of several other U.S. presidents.

“Goodwin will share her insights into the personal and family lives of past presidential leaders and the influence their ancestors had on their personalities, behavior, decisions, and careers,” said Paul Nauta, FamilySearch spokesperson. “She will also share anecdotes about her own family and experiences which have shaped and influenced her life.” For more information, see “Pulitzer Prize Winning Biographer, Historian, Doris Kearns Goodwin, to Keynote RootsTech 2016” on the FamilySearch blog.

That’s all the time I have. See you in January!