The Science Behind AncestryDNA -- #NGS2017GEN 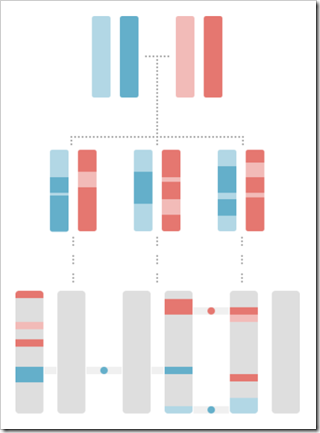 Julie Granka, of AncestryDNA, spoke about “Understanding the Science Behind Your DNA Results” at the 2017 National Genealogical Society Conference last week. I’m hardly qualified to report about this session, but I’ll give it a try. Julie started by defining several terms, utilizing lots of diagrams. I was hoping to link to some pages on Ancestry.com that contain explanations as clear and simple as Julie’s. No luck. If I am going to provide links to basic information about DNA and genealogy, I will have to send you to someplace other than Ancestry. That is too bad. They should publish Julie’s presentation on their website.

Judy Russell, The Legal Genealogist, has provided a nice list of links to introductory information. See “DNA Basics for a Sound Foundation.”

Suffice it to say, there are basic building blocks of DNA that are represented by the letters A, C, G, and T. Our chromosomes are composed of long strings of these—3 billion, in fact. Almost all the letters are the same in every single person on the planet. Julie said that only about 10 million are different among different individuals and populations. A DNA test looks at about 700,000 of them. A location in the string of letters where the letters differ between individuals is called a SNP (pronounced “snip”). A group of inherited letters is called a haplotype.

AncestryDNA uses the SNPs and haplotypes to determine three things.

It is possible to share no DNA at all with cousins. The closer the cousin, the higher the probability of shared DNA. Julie showed these numbers:

She showed a chart that looked like the one below. I think it indicated the average amount of shared DNA between two close relatives. It went by so fast, I am not certain. However, Blaine T. Bettinger provides similar data, which I’ve charted below. 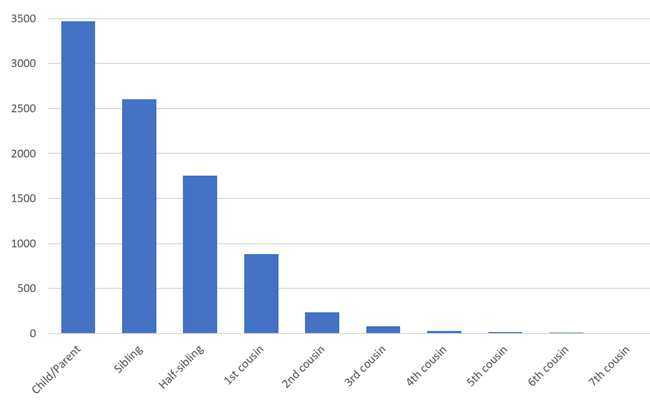 AncestryDNA uses these numbers to estimate your relationship to your DNA matches.

She covered more, but that’s about all I have time and space for here. I’m sorry that I’m not as clear as she was, but hopefully you learned something.