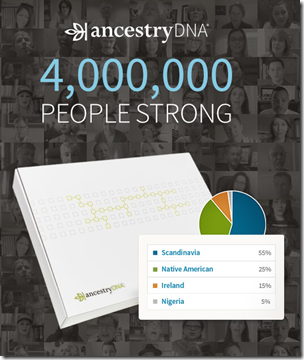 It took just seven months to get to the three million mark. (See “AncestryDNA Zips Past 3 Million Samples” on 19 January 2017.)

Less than 4 months later, AncestryDNA has reached four million persons in the DNA database. (See “AncestryDNA Reaches 4 Million Customers in DNA Database” on the Ancestry blog, 27 April 2017.) AncestryDNA must be selling over 8,000 kits a day to grow that fast. Ancestry says as many people took their DNA test during that period as got married in the United States. They said “that’s about as fast as babies are born in the United States.”