The Evidence Architecture of the New FamilySearch Tree

Let me show you that the New FamilySearch Tree (NFS) has the architecture needed for evidence management. You may not want to try this at home; I’m a trained professional on a closed course.

Before we dive into New FamilySearch, it will help if you know some NFS technical terminology.1

If I specify both my term and the NFS technical term, I will separate the two with a slash, like this:

To illustrate evidence management in NFS, I again use an example from David Rencher. I created an evidence summary (persona) in NFS for Angeline Clements for each of the five sources, below.

Click the image link to see a digital copy of the source.

I included evidence summary names in the table even though NFS doesn’t support them. Instead, NFS uses persona IDs. Remember, a persona in NFS takes the place of an evidence summary.

Click the thumbnail to see an image of the evidence summary. Compare a source and summary to see that the two match.

With such a perfect architecture under the covers, it is unfortunate that FamilySearch chose to dumb-down the interface to the lowest-common denominator. I think it is possible to adequately serve patrons of all genealogical maturity levels. Because NFS doesn’t give direct access to personas, and because I know that creating an individual (person) also creates an evidence summary (persona), I clicked on Add Information and then Add an Individual That Is Not Connected to My Family Tree.

Then I added the evidence from the source: 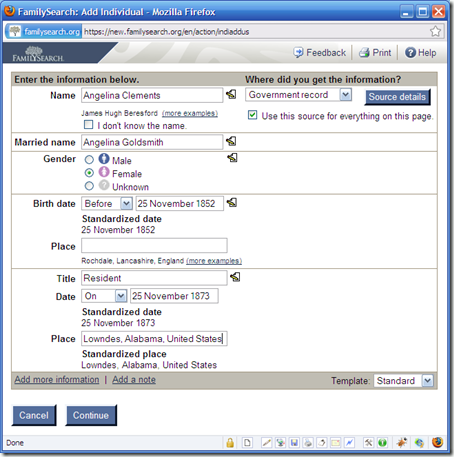 Evidence from the “Peyton Clements probate finalized” source.
Click on this and subsequent images to enlarge.

Since the summary was to be combined with Angeline, I entered only her information. Because it was not obvious how I arrived at a birth date of “Before 25 November 1852,” I clicked on the note icon and entered: “Probate file states Angelina is over 21 years of age.”

For each summary, I clicked on Source details and added a citation. A true evidence summary has but one source for the entire summary. Because NFS doesn’t have true summaries, I clicked the checkbox, Use this source for everything… As mentioned in the past, NFS source templates are inadequate. Consequently, I entered the entire citation in the Comment field, as illustrated below.

Once I completed an evidence summary, I clicked Continue. For summaries without death information, NFS gave me the opportunity to enter it.

I appreciate the reminder to enter information that might have been inadvertently missed. But It is unfortunate that NFS insists on adding information—a death flag—even when the source did not contain death information. It seems superfluous, given that NFS is already completely convinced that the person is dead.

NFS then let me review the information. 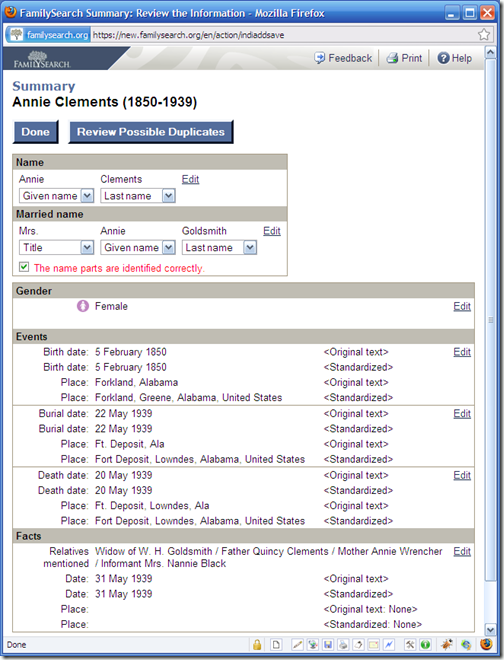 Notice that all the information is repeated twice. This is one of the nice features of NFS. I can enter information exactly as it appears in the source document. Below the original text, NFS displays its standardized interpretation so I can see if it understood. Most programs either throw away the original text, or silently—and perhaps incorrectly—interprets it.

If NFS truly supported evidence management I would click Review Possible Duplicates to see if anyone else had already entered an evidence summary for this source and this person. Then I would click Done.

After I clicked Done I saw the completed evidence summary (persona). 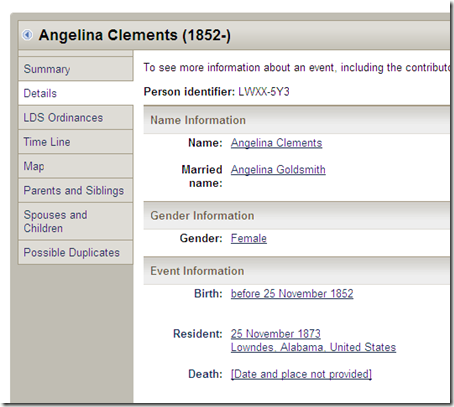 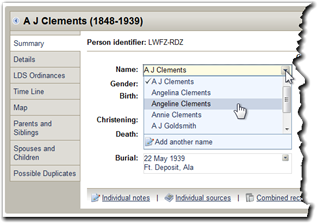 As I’ve mentioned, the big payoff for evidence management comes next, when making a conclusion. NFS requires that evidence summaries (personas) be connected (combined) to individuals (persons) prior to using the evidence to make conclusions. The process is messy and reflects the duplication problem that FamilySearch painted itself into. Indulge me if I gloss over it and go right to entering conclusions. Suffice it to say, I connected all the summaries to the individual.

I then clicked on the Summary tab. In the context of evidence management, it could be called the Conclusion tab. The Conclusion tab shows the basic vitals: name, gender, birth/christening, and death/burial. Next to each is a down arrow (pointed out by the mouse pointer in the illustration to the right). I clicked the down arrow and NFS displayed all the values entered into the evidence summaries. I pointed to the one representing my conclusion (pointed out by the hand in the illustration) and clicked it.

Below, compare my suggested conclusion entry (left) with that of NFS (right) for the birth date of Angeline Clements. 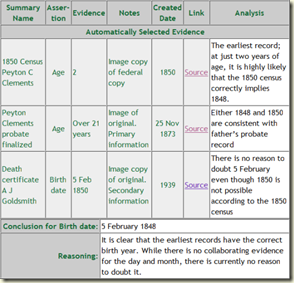 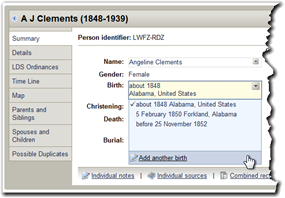 Comparing the two you will notice several shortcomings in NFS conclusion entry:

The evidence management compliant architecture of NFS has given FamilySearch nothing but problems, so I expect they will discard it. One reason it has proven problematic is FamilySearch’s decision to preload millions of junky, sourceless evidence summaries (IGI patron submissions, Ancestral File, and Pedigree Resource File). But I digress.

Use the Combined records option to see the connected (combined) evidence summaries: 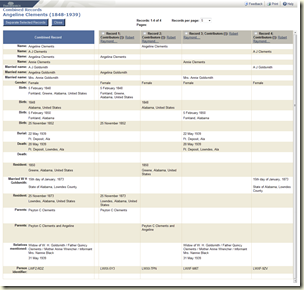 This option gives users the ability to disconnect (separate) summaries (personas) mistakenly connected to the wrong person. When you do this, all the assertions from the source come out in a group. And when the summary is reassigned to the correct person, all the assertions come in as a group.

Because I understand the NFS architecture, I can tap into the strength of its evidence management. But doing so is painful. FamilySearch users have not benefitted from their architecture for two reasons. First, since FamilySearch preloaded garbage into NFS, garbage is what they’re getting out (GIGO). Unfortunately, user interface and architectural decisions are now being driven by the resulting ripples. Second, FamilySearch chose not to provide a different user experience to immature users and mature users. FamilySearch then had to simplify the user experience by hiding the existence of evidence summaries (personas).