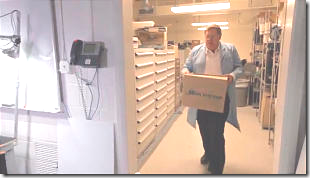 Missionary Brent Heineken carries box of records
in Tacoma, Wash.
Image: Intellectual Reserve, Inc.
The Church News of the Church of Jesus Christ of Latter-day Saints recently ran an article about record preservation missionaries manning cameras for FamilySearch. (FamilySearch is wholly owned and operated by the Church.) Here’s information and quotes I’ve gleaned from the article.

FamilySearch has 200 teams in 45 countries capturing digital photographs of historical records, according to Paul Nauta, FamilySearch marketing communications manager. (If I understand correctly, FamilySearch still has a couple of microfilm cameras still in operation. But I digress…)

“FamilySearch plans to significantly expand its digital preservation efforts starting this year,” he said. About 80 of the teams are missionary couples and FamilySearch hopes to increase that number to 200 this year and even more in 2014 and 2015.

“We're now producing, online, about 400 million digital images a year,” Nauta said. “The bulk of that, about 250 to 300 million images, is coming from vault conversion.” As the conversion of microfilm in the FamilySearch vault tapers down, FamilySearch hopes to maintain the 400 million annual publication rate by increasing the number of camera teams in the field. About 80 million historic images came from the field last year and the number is expected to increase to about 100 this year.

Most of the article is a pitch to retired couples of the Church to volunteer as record preservation missionaries.

“We need volunteers to go out and help us now as we continue to gather new records,” said Nauta. “They will handle priceless historical documents — in some cases older than the U.S. Declaration of Independence,” he said. “In essence, they are helping preserve the literal heritage of a nation and the world for future generations.”

“Records preservation missionaries can serve for one to two years,” he said. “They can serve locally or internationally and choose where they want to serve.” 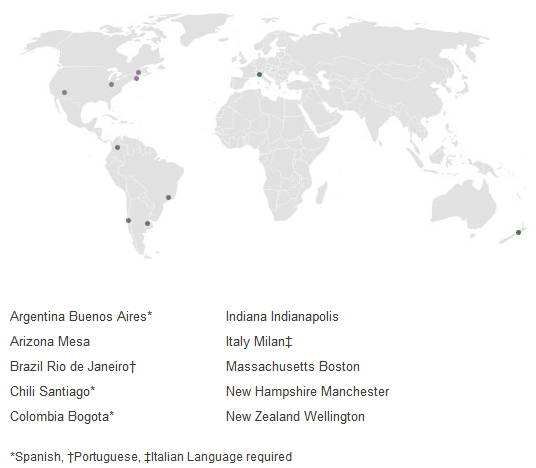 According to the article,

Couples interested in serving in the records preservation effort can learn more about it by going to the website www.familysearch.org/serveandpreserve. There they may watch an explanatory video titled "A Day in the Life of a FamilySearch Records Preservation Missionary."

To read the article in its entirety, see “Family History: Preserving the World’s Records,” by R. Scott Lloyd.