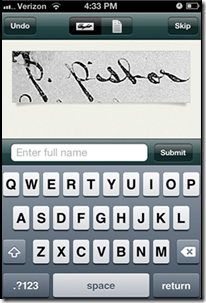 Image Credit: © Intellectual Reserve, Inc.
“In February 2012, FamilySearch quietly launched a beta test of a FamilySearch indexing mobile app for the IOS and Android platforms,” Michael Judson, FamilySearch Indexing spokesperson, said last month. “At this point, we feel we have enough beta testers and have decided to restrict the app from further downloading.” The withdrawal of the app from the app store occurred mid-December.

Judson went on to say something that made me wonder if the beta program is winding down. He said that current mobile indexers could continue to do, but only a limited number of new snippets would be produced.

I’ve wondered if and when collections indexed might be published. Judson said, “all information indexed on the mobile app will eventually become part of the searchable collection on FamilySearch.org.”

When you say “beta test” to me, as an old software developer, I think of a final test before a product is released. This was not the case for the Mobile Indexing app. The purpose of this beta test was to

Interest was deemed to be high. The app was downloaded more than 150,000 times and more than 21,000 individuals used it each month.

FamilySearch received feedback and Judson promised it would be used to help improve the product.

Relatively, the production of mobile indexers was discovered to be far less than desktop indexers. Further, the cost of preparing indexing batches of name snippets is expensive.

So what is the future of mobile indexing from FamilySearch? “We know the beta test has raised the anticipation level for some,” he said, “so we ask for patience as we continue to work toward delivering a truly effective mobile solution. FamilySearch is committed to getting this right.”

As of 14 December 2012, the regular FamilySearch Indexing program had produced: