1) Does FamilySearch have the same records as Ancestry.com because there are two teams of people photographing the same materials? Or, do the different entities keep each area with some propriety, so that there are fewer duplicates?

2) Are there any plans to go back to some of the older records, for example, in Italy, where the first microfiche records are so poor?

Ancestry.com and FamilySearch have been known to swap records. That would explain why some collections are present on both websites.

Sometimes the two organizations work together on a project. At RootsTech this year, Ancestry.com’s Tim Sullivan announced “our largest and most ambitious collaboration with FamilySearch, ever.” The two will work together to digitize, index, and publish U.S. probate records.

Both companies have their own digitization teams out imaging records. (Nearly two years ago I published maps showing the locations of each organization’s digitization teams at the time. Click on the maps to enlarge.) I suppose duplication could occur, but typically archives won’t allow it. Handling records causes deterioration so archives don’t like two entities both photographing the same records.

As to going back to retake photographs of records already on film or fiche: I suppose it could happen, but I think these organizations get more return on their investment by going after new records.

That said, I know that FamilySearch is digitizing more than 115 million images of Italian birth, marriage, and death certificates. (See “Italian Ancestors: Making Italy Civil Registration Records Freely Searchable Online.”) Perhaps they will get the records you need. If you can read Italian records, I’m sure they would be happy if you would help out. 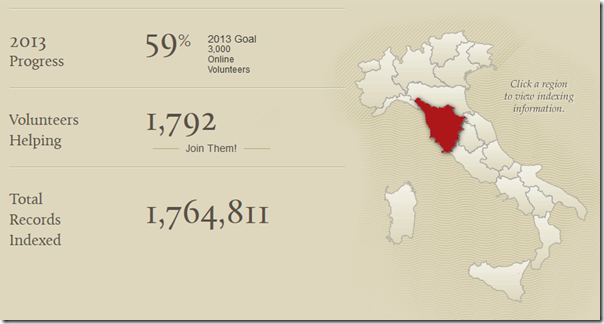