Not Just a Chart, But a Heart 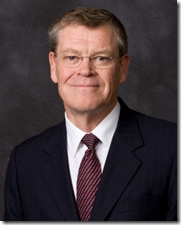 “We may rattle your bones a little bit, those of you who are family history consultants,” said Dennis Brimhall. Brimhall was the Wednesday keynote speaker at the 2013 Brigham Young University Conference on Family History and Genealogy.

“To those of you who come from other faiths,” said Brimhall, “we recognize that you’re in a different culture here.” Indeed, much of Brimhall’s presentation was addressed to Church members or the Church’s family history consultants. (There are 70,000 of them worldwide.)

“We’re here to help people turn their hearts,” Brimhall said. We’ve not been successful in turning hearts of as many people as we need to be, he said.

“We have to start them with the heart and they’ll get to the chart later on,” he said. Too often we started them with the chart and lost them before turning their heart.

We’ve done some remarkable things, said Brimhall. FamilySearch has 4,700 family history centers in 129 countries. They’ve published 2.9 billion searchable names and are adding 1.7 million daily. They have 237 camera teams worldwide and hope to grow that to 500 by the end of next year. (They are looking for missionary volunteers who would like to spend some time doing this.) They are digitizing the microfilm in the vault and think they’ll be done in five to seven years.

“If you think of all of that, the question comes on occasion, ‘How well are we doing?’” said Brimhall. “How many Church members are using it if they are paying for it?” While 25% of adult Church members have registered, only 8% have returned to FamilySearch.org in the past 12 months.

Brimhall quoted a saying, “Every organization is perfectly designed to get the results it gets.If we keep doing what we have been doing, we'll keep getting what we've always gotten… The definition of lunacy is to keep doing what you've always done and expect different results.” (He seems to have been quoting Paul Batalden of the Dartmouth Medical School.) He said we will not improve over the 8% unless we change what we’re doing.

A significant portion of Church members do not have access to computers. Just as members don’t need to have a computer to pay their tithing, so also members should not need a computer to gather information about their ancestors. FamilySearch has developed a “wonderful little booklet” (the same mentioned by Elder Packer yesterday) that will be available in 22 languages by the end of August. It starts by soliciting stories. This lets people get engaged without a computer. You can then take the booklet to a family history consultant who can put it into FamilySearch.org for you.

“We’re well on our way and it will be distributed primarily in countries outside the U.S. where computers are not available,” said Brimhall.

The next change is to family history centers and libraries. “We want to change the library from a computer lab to where the first thing you do—not for the seasoned users who go right to the computers—they can have a discovering experience where they can discover themselves,” said Brimhall. Let them learn about themselves and then get them to build their family history. The transitioning of family history centers will occur over time.

Davidson felt her job was to get people excited about family history, said Brimhall. The research and the learning and the charts follow. Consultants must retrain themselves on how they can get people excited in addition to helping them with names, dates, and places.

FamilySearch has changed the FamilySearch.org website to make it more engaging to new people. Brimhall joked that we, genealogists, would come and use the website no matter what. The design is to attract those who haven’t visited before. The new features have been very successful. Family Tree contains 950 million names and 41,686 new names are added daily. Names added by the general public (as opposed to Church members) account for 27%. Users have contributed over 700,000 photographs and 5,000 more are added daily. There are over 60,000 stories and 500 are added each day.

Photographs and stories are a great way to engage family members and can be shared via email or other social media. “Kids are incapable of not clicking a link,” he joked. I could never get them through the front door [to the website], but I can get them through the side door, he said. Then we’ll move them from there to doing research.

Another change is to make family history a bigger part of Church culture. FamilySearch has found that wards who implement any five of seven key actions will double the number of members participating. They are: