Ancestry.com has added a new feature to their image viewer. Click Related Content to show a pane along the right side of the window that shows records that might pertain to the person named in the record you are viewing. 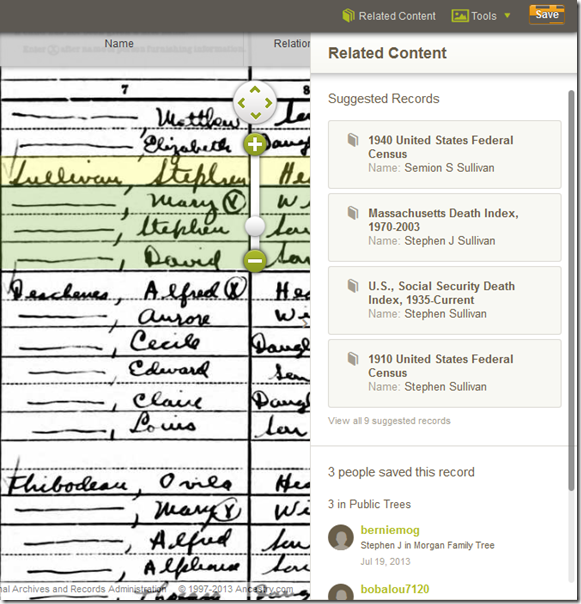 I’ve never heard Ancestry.com explain how they determine related records. The safest method, when the record has been attached to a person in a tree, as in the example above, would be to show other records attached to that person. Ancestry.com doesn’t seem to be doing that. The example above shows the record of Stephen J. Sullivan in the 1940 census. Note that the first suggested, related record is for Semion S Sullivan. It is unlikely that Stephen was indexed twice in the 1940 census. That he was indexed once as Stephen and once as Semion, is extremely unlikely.

Machine matching has its place. I support its use as a means for suggesting to users possible matches that users then must manual review, accept, or reject. But as we’ve seen in Ancestry.com’s member trees and FamilySearch’s NFS and Family Tree, a few users accept matches without question, wrecking havoc.

Organizations must take all possible measures to discourage bad user behavior. First, matches should not be suggested unless they are almost certain.

Third, , organizations should inform users of the probability that a given match is correct. Ancestry.com and FamilySearch.org have extensive datasets that could be used to calculate these.

Mathematically combining these for two potentially matching records could yield a probability that the two people were the same person. That number should be presented to users so they understand the uncertainty of the match.