Last week Ancestry.com released a new, upgraded experience for their autosomal DNA tests. Not only will new purchasers get the enhanced results, the results from past purchasers has been upgraded as well.

Dr. Catherine Ball, Vice President of Genomics and Bioinformatics for AncestryDNA said, “Today, the AncestryDNA science team has examined more than 700,000 DNA markers to create a genetic portrait for groups of people around the world. By comparing someone’s DNA to this core reference set, we can calculate an ethnicity estimate based on 26 global populations.”

The 26 global regions increases the number of regions from the previously identified 22. African ethnicity has expanded to a total of ten African regions, including six different countries/regions within Western Africa, including Benin/Togo, Cameroon/Congo, Ivory/Ghana, Mali, Nigeria, and Senegal. The British Isles is now divided into Great Britain and Ireland. Southern Europe is separated into the Iberian Peninsula (Spain and Portugal) and Italy/Greece.

The Autosomal DNA testing used in AncestryDNA’s test has been received with much more skepticism than the familiar Y-chromosome and Mitochondrial DNA tests. It has been a lot harder for me to understand. While Y-chromosomes and mitochondrial DNA are most often passed unchanged from parent to child, Y-chromosome tests are a reliable way of determining that two males share a common ancestor.

Autosomal DNA is a random recombination of DNA from both parents. I assume an ancestors DNA might be totally displaced, leaving no DNA evidence of that ancestor’s existence. Consequently, Autosomal DNA testing works best in determining broad, ethnic origins because the larger the group of ancestors, the more likely their genes are to have survived in you.

With the imminent release of these enhanced test results, I finally bit the bullet and purchased a test. Before the new results were released, A cousin and I were disappointed that our Native American ancestry was not indicated in the AncestryDNA results. My cousin subsequently did the 23-and-Me test and was pleased to see the expected 2% Native American ancestry.

Consequently, I was pleased to see the Native American ancestry in the new AncestryDNA results. 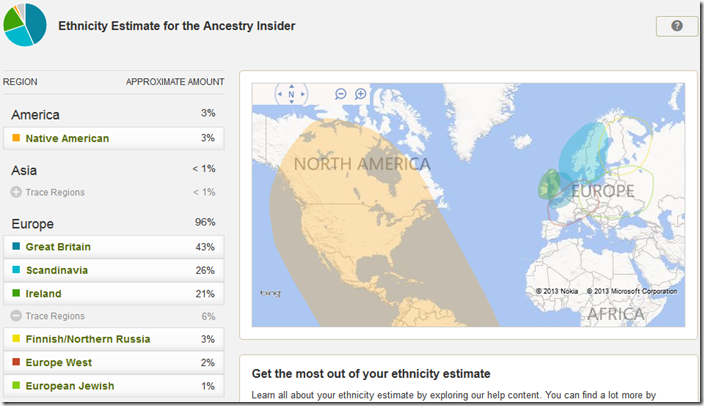 The Irish ancestry, 21%, is larger than my pedigree would predict, which is 6.25%. This can be explained in a couple ways.

Just because an ancestor on your pedigree chart was born in England with an English surname doesn’t mean all their ancestors were “genetically pure Englishmen” (whatever that means). Some of my English ancestors most probably had intermarried with Irish persons.

The other explanation has to do with the science and math involved in the predictions. I won’t go into it here, but you can read more on the AncestryDNA website. (Oops. Ancestry.com is doing one of those stupid popups that doesn’t have a URL, so I can’t send you to the explanation. This link will show the text but not the diagrams.) Suffice it to say that the percentages given are only averages. The actual value can be anywhere in a range that can be seen by clicking on the result.

For my 21% Irish ancestry, the actual value could be anywhere in the range of 6 to 36%, as shown in the diagram to the right. That covers the 6.25% value predicted by my pedigree.

Besides showing broad ancestral ethnicity, autosomal DNA can identity close, modern relatives. My results showed a close family member (actually, my uncle), one 1st-2nd cousin (roninsider55, who is actually my 1st cousins), two 2nd-3rd cousins (cooperjh and orchardgordon1, whom I don’t recognize by their codenames), three 3rd-4th cousins, over 70 4th-6th cousins, and a 110 pages of distant cousins. Your mileage may vary. I’m a descendent of early members of the Church of Jesus Christ of Latter-day Saints, which heavily encourages members to do genealogy, so I am not surprised. 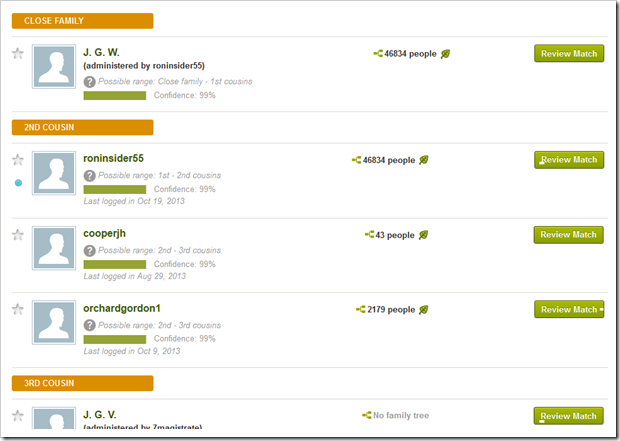 As you can see, codenames give some level of privacy to participants. If you don’t want them known, don’t include your first or last names in your codename.

To the right of the codename is a number indicating the number of persons your relative has in their member tree. A shakey leaf next to that indicates that Ancestry.com has used your tree and his and identified your common ancestor. Clicking Review Match shows the exact relationship (see below).

Beneath this is the relative’s pedigree. (See the example, below.) Despite the anonymity enjoyed by using codenames, seeing that person in the context of their tree, you can see their surname and their deceased parents’ names. In many cases, particularly for closer relatives, this allows exact identification, despite the codenames. If you have good relatives, that’s not so bad. If you don’t,… well, that’s another story. 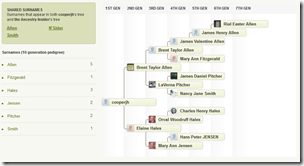 As I mentioned, you may not see the number of close relatives that I did. One criticism often directed at AncestryDNA is the size of the pool of participants. According to Ancestry.com, the pool has grown to 200,000 customers. Not long ago Ancestry.com dropped the price from $199 to $99 to encourage participation. Additional information can be found in the press release and at www.AncestryDNA.com.