Any cat owner can tell you that cats do not recognize humans as the dominant species. Rather, it is cats that keep humans as pets (or servants).

It’s Halloween so it should be no surprise that black cats would find their way into the census. Not long ago FindMyPast.co.uk alerted us to Bobs the Black Cat, owner of the Ladbrook family of Mistley, England. 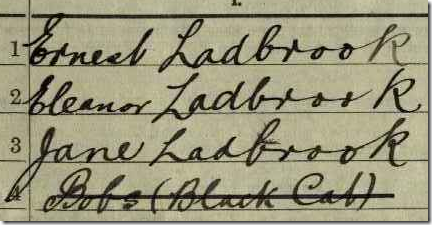 As you can see, Bobs has attempted to preserve his anonymity (no doubt to hide his nefarious plans) by having his name stricken from the enumeration.

I was not able to achieve the same level of confidence on FamilySearch.org. Their search engine lacks this advanced feature, their index of the 1911 England Census lacks even basic fields (let alone the street address), and their website doesn’t include images of that census.

Credit FindMyPast.co.uk with uncovering this insidious plot to infiltrate a fundamental human institution, the census.