Serendipity in the Riverside Courthouse 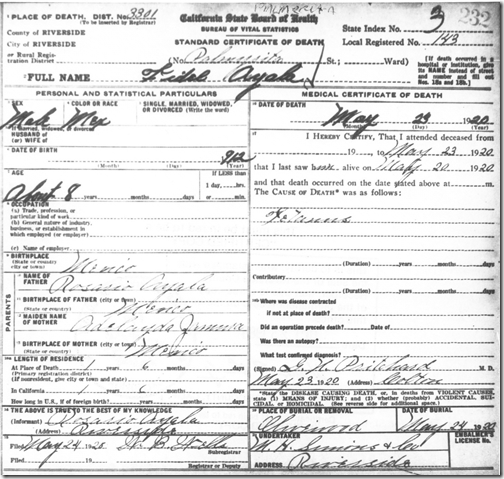 Michael Gonzales shared with me this story of serendipity:

About 25 years ago I took a trip to California from my home in Texas to visit my mother, Minnie Ayala Gonzales.  She told me that her brother, Fidel Ayala, died in Riverside, Riverside County, California in about 1920 at the age of 8.  My mother remembered his death and was sure it was recorded in the Riverside County courthouse.  On a Friday we drove from Los Angeles to Riverside and got there on about 2:00 PM with plenty of time to request and obtain the death certificate.  We requested the record and waited for the customary time only to have the clerk tell us that there was no record of his death in Riverside County.

We were surprised and further questioned why there should be no record of his death since my mother and her parents were present at his death.  The clerk insisted that there was no record of his death and was very sorry that she could not produce a record since there was none recorded in that courthouse.  This caused us great consternation as we didn't have much time before the office would be closed for the weekend.  It was made more worrisome in that my visit with my mother was to end on Monday when I would return home by air with this issue unresolved.

Just almost at closing time an elderly gentleman came out from the rear of the office and said he couldn't help but overhear our concern.  He said that he recalled some years back that they had a problem with a group of records that didn't get filed and asked us to wait until he had a look.  He came back with a document in his hand and asked if that were the record we sought.  It was my uncle Fidel's death record!

He explained that Fidel's record and a number of others were stacked on top of a file cabinet in the back room of the office, unfiled because they hadn't determined how they were to be filed when the date of birth of the deceased was unknown.  Uncle Fidel's record showed that he was "about 8 years of age" at the time of his death but lacked his exact date of birth.  We are truly grateful that the old gentleman stepped forward with his corporate knowledge to clear up this dilemma.

If you visit or write to a enough archives, the day will come when you’ll be told a record doesn’t exist that you’re pretty darn sure actually does. A clerk’s time is valuable and they usually have more pressing things to do (like the time I visited a Town clerk’s office in New England on the day before an election). They do their best to make a cursory search, but you can’t expect them to make extraordinary efforts. It was truly serendipitous that the old gentleman was present in the clerk’s office that day, that he overheard Michael’s plight, that he carried the necessary institutional memory, that he was willing to stop what he was doing to help, and that he was able to find the record in an unorganized pile.

That is what we call, “Serendipity in Genealogy.”

Thank you, Michael, for sharing.