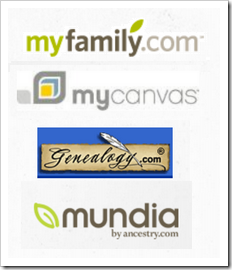 Ancestry.com announced this morning at 10:00 MT that it is retiring several of its websites. The websites are

Ancestry.com is trying to soften the blow of these shutdowns. Users will be told the retirement timeline and how to export their data.

Of much greater portent, in my mind, is that Ancestry.com is eliminating their Y-DNA and mitochondrial DNA tests. This is big. I’m surprised Ancestry.com isn’t more aware of how genealogists utilize DNA in indirect proofs. Apparently, they don’t read the National Genealogical Society Quarterly or other genealogical journals. This will cause a massive exodus of serious users of DNA to other companies, such as Family Tree DNA. I was just about to pay for several family member tests. I’m looking at going elsewhere now.

It’s hard to believe they would commit such a major blunder. I must be missing something. Maybe they’ll fold these test results into their autosomal test.

I’ve not been paying attention to any of the four websites for a long time, so I can’t say definitively that they have long languished from neglect. But I think that’s probably the case.

This was in the early days of the Internet. No websites were making money and company valuations were based on the number of users, not profitability. I heard a rumor around town that at one point in time they were offering to pay people a couple bucks to create a free family site on MyFamily.com. (Does anybody know if that was true?) They could increase their valuation by perhaps hundreds of dollars by paying customers a few dollars. According to Wikipedia,

The MyFamily.com website launched in December 1998, with additional free sites beginning in March 1999. The site generated one million registered users within its first 140 days. The company raised more than US$90 million in venture capital from investors.

In response, Ancestry.com changed their name to MyFamily.com. When reality finally came to the Internet, focus shifted from MyFamily.com back to Ancestry.com. The company name eventually followed.

Ancestry.com took a stab at making the MyFamily.com website profitable. They hired a team in Bellevue, Washington, and did away with the free-account business model. The attempt did not succeed. The Bellevue office was closed in 2010 and the development team was dissolved. Since then, I don’t think Ancestry.com has given any serious attention to MyFamily.com other than using it to host DNA groups.

Ancestry.com will refund money to active MyFamily.com site subscribers. Refunds will be prorated as of today, 5 June 2014. Ancestry.com will export data by request. I’m not certain what format will make sense; we’ll have to wait and see.

MyCanvas will continue to accept and produce orders until 4 September 2014. At that time, all projects will be deleted.

This is one website I can speak to definitively. From the time that Ancestry.com bought Genealogy.com there has been no upgrades to it. I don’t believe I ever saw it advertised. Ancestry.com copied every website they could over to Ancestry.com. (I think there has been some unique content that was never moved over. Can anybody vouch for that?) They had a grand opportunity to do then what they’re trying to do now with Archives.com now. It could have been their Dodge to their Chrysler, their Luvs to their Pampers.

Genealogy.com users will be able to log into their accounts and export their data until 5 September 2014. While subscriptions to Genealogy.com will no longer be available, some of its content will be kept around in read-only fashion. Ancestry.com will preserve the old GenForums message boards (although new posts will not be possible), Family Tree Maker home pages, and the most popular articles. I appreciate this. I don’t know the cost to retain these portions of the site, but they have long-term value and I’m glad they are keeping them around.

I’ve never quite understood Mundia. My best guess is that it was an attempt to enter new markets with a tree product and no accompanying historical records. It is available in English, French, German, Italian, Swedish and Spanish. Members can download their family trees until 5 September 2014. I believe Mundia trees were always visible on Ancestry.com and vice-versa. Mundia trees will continue free via Ancestry.com.

Except for the Y-DNA and mtDNA retirements, none of these surprise me. Well, maybe genealogy.com surprises me a little. It’s a brand just wanting to happen. But these websites have been a distraction and probably haven’t been generating any profits. Ancestry.com has plenty of other brands it is actively working: Find-a-Grave, Newspapers.com, Family Tree Maker, ProGenealogists, Fold3, Archives.com, and RootsWeb. (OK, “active” may be an overstatement for that last one.) Hopefully these will be more successful than the former.

For more information, see the article on the Ancestry.com blog and—if you are a user of any of these sites—an email in your inbox and a banner on the website.