They Were Under Her Bed All the Time

Listening to Alaura Ramsey's story, it sounds like Uncle Sammy might have been a favorite Uncle. But while she felt a special closeness to him, Samuel Wilson Black had married into the Boyce family and Ramsey grew up without learning much about his family. Like most of us, I imagine the genealogy bug didn't bite her until Uncle Sammy was gone and it was too late to ask him.

As she acquired each evidentiary artifact, she dutifully typed the information into her computer, marked the document with a check-mark in the corner, and filed it into her Boyce Family folder. Ramsey found Uncle Sammy as a boy in the U.S. census. That gave her his siblings' names and approximate birth years.

But then years went by and Ramsey could find little additional information about three of the siblings. She knew Uncle Sammy's parents and grandparents had moved to Idaho when he was young. Living in Boise, Ramsey availed herself of the state's historical archives. Many a time she concentrated hours of her research on just these three siblings, only to come up empty. The sisters were especially difficult because she was unable to identify their married names.

Recently, Ramsey decided to perform an exhaustive search for Sammy's sister, Virginia. She spent hours. Again, she failed to find any additional information. Having pursued every avenue she knew how to do, in utter frustration she appealed for help from beyond this world. "Heavenly Father," she prayed, "please help me find them, if it is Thy will." She got her answer the very next day. 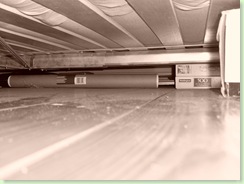 Ramsey was getting something from under her bed when she glanced over at some genealogy files and the thought came to her:

You really should go back through those records and check to see if you have the sources accurately recorded.

Ramsey was meticulous; she had no doubt that there was nothing in her files that needed to be recorded. Still, perhaps more for curiosity than for any other reason, she opened the box. She opened the Boyce Family file and examined the document on top. She discovered it was the obituary for Uncle Sammy's father!

And it didn't have a checkmark.

I imagine her heart skipped a beat as she skipped to the end of the obituary where survivors are enumerated.

And there it was.

Surviving is a daughter Virginia Schmutte, living in Nebraska.

And it didn't stop there. The other two siblings of interest had also survived their father. They were listed, married name and residence.

Alaura Ramsey sought Uncle Sammy's family all over the state, only to find they had been under her bed all the time.