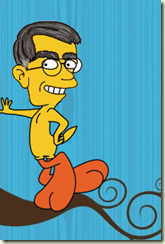 With so many translators on the Internet—including Pig Latin—you’d think there would be one for Tweety Bird-speak.

Fortunately, there are plenty of web sites to assist Twitter users. Today would be a good day to try some out because the Salt Lake Family History Expo today and tomorrow is officially encouraging live coverage on Twitter.

Twitter allows the formation of ad-hoc communities through the use of the pound sign (#). (Actually, geeks don’t call it a pound sign. Like star and dot, geek-speak words for asterisk and period, the geek-speak word for the pound sign is hash. But I digress…) Each Twitter community picks a hash tag, which is nothing more than an identifying tag preceded by the hash symbol.

For example, Expo organizers have chosen #FHX09-SLC for this weekend’s conference. For the recent BYU conference, I proposed #byugen. I made the proposal on my blog and tweeted it with the hash tag #genealogy. A temporary community magically materialized around that tag, then dissipated when the tag disappeared from Twitter’s search results.

Thomas MacEntee of GeneaBloggers recommends claiming a hash tag on the web site What the Hashtag. I’ve claimed the Salt Lake Expo tag using another site, TwapperKeeper.com, which also keeps an archive of the tweets.

I came across the site when I learned about Twitter coverage by attendees to the recent Society of American Archives (SAA)  2009 Conference. Tweeters used the hash tag #saa09. You can peruse archives of the Archives conference at http://twapperkeeper.com/saa09/ . TwapperKeeper.com is a pretty cool site because you can download a copy of all the tweets (nearly 3,000 of them) into a spreadsheet already sorted chronologically. I don’t know how long it keeps the tweets, but I know Twitter doesn’t keep them very long. A search for #byugen will no longer surface tweets made at the July conference.

(SAA has also posted videos of some sessions on their Facebook site. But again I digress…)

You may recall that some discussion followed our twittering of the BYU conference and the reposting of those tweets on our blogs. (See my article, “Insider Incites Intellectual Property Profundity” or others’ articles, here and here.) Overall, I think user response to coverage of the BYU conference was extremely positive. Here are some of the positive comments I received:

Your tweets were like a review of the speaker.  I especially enjoyed the Colletta one and I think he would be worth the time to hear in person. … I hope that the "profundity" of it all doesn't cause you to stop twittering conferences.  You are doing a service for people who aren't able to attend.  Thank you!
(Katherine)

I enjoyed the tweets from you and Mark Tucker enormously during the event. Thank you. (Sheri)

The Tweet comments are very insightful and are fun reading. (Jeff)

I've been reading your postings from the BYU Conference with great interest - I wasn't able to attend, and tweets can be great for a "straight to the bone" take on things. (Stephen)

I'm thrilled to be able to read your tweets of both the opening talk by Bro Groberg and especially of the classes you attended - especially with your enlightening comments on the material. It is the next best thing to being there in the first place. Thank you! I surely hope and look forward to seeing all of your classes in this way. We learn so very much from you all along the way and this is icing on the cake. I am grateful to you for your insights. (Mary)

Of course, I also got some real-time encouragement from other Twitterers during the event:

Thanks for the many useful tweets on #byugen keep them coming :-) (@Bwoolley)

Thanks for you honest account at #byugen Keep it up!!! (@morontina23)

Thanks, all of you, for your support. As a result of the discussion, I will change how I tweet a tweeny bit. You may not even discern the changes. I’ll reduce my new Twitter policy to writing in the coming days.

You don’t have to join Twitter to follow the Salt Lake City Family History Expo today and tomorrow (28 and 29 August 2009). Here’s several ways you can listen in:

There are good reasons to follow just one of the people twittering the conference. Of course, there’s the telephone party line problem of a dozen people all talking at once. And all of the above services start dropping tweets when there are more than about 60 or 70 an hour. But if you go right to the individual tweeter, you won’t miss a beat.

Follow just my tweets of the conference at @AncestryInsider. You’ll find links to the other official conference twits (uh…, twitterers) at http://www.fhexpos.com/events/upcoming.php?event_id=50#extra_notes . When following an individual, you’ll need to refresh the page when you have a moment and want to catch up.

Because this group will be so active during the conference, if you normally follow one or more of us, you may find your usual Twitter routine turned upside down by the increased traffic during the conference. Someone recommended another site, TwitterSnooze.com, which will allow you to temporarily un-follow someone. (I’m sorry that I can’t give proper credit for the suggestion. I neglected to record who it was.)

If you aren’t following Twitter real-time, coming back later and trying to read the reverse chronological layout can be down right annoying. Never fear. As with the BYU conference, I will be re-posting my coverage in the days following the conference, right here at The Ancestry Insider. No doubt the other official bloggers will be blogging away as well. Stay tuned…