It had to happen sometime. It was inevitable. An influential Hollywood star has experienced that ethereal connection we call serendipity. Who, you ask? Lisa Kudrow. She’s the executive producer of “Who Do You Think Your Are?” How do I know she’s felt it? If you’ve experienced it then you know that the word serendipity—any word, any description—falls short. Kudrow, faltering, stammering, put it this way:

I'm going too far, but it's almost like supernatural to me.1

It’s an interesting paradox. Big name stars draw a big audience. But big stars don’t have larger-than-life ancestors. Part of the draw is that their ancestors are just like ours. In fact, sometimes they ARE ours! 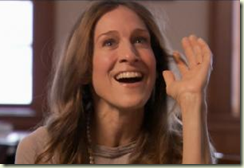 Tonight, Sarah Jessica Parker learns her connection to the Salem Witch Trials. Randy Seaver spoke earlier this week about his ancestor, Rebecca Towne Nurse, who was hanged as a witch. My ancestor gave testimony that he witnessed the young girls admit that their accusations were for sport.

What is your connection to Sarah Jessica Parker? Tune in tonight and find out.

“Who Do You Think You Are?” premiers on NBC tonight at 7 or 8 PM, depending on where you live. In the Salt Lake City viewing area, the show is on KSL Channel 5 at 7 PM.