Today’s Vault Vednesday warns of your last chance to get the early bird registration discount for the NGS Family History Conference, recounts the completion of the Granite Mountain Record Vault (GMRV), and gives a great link for spreading the word about “Who Do You Think You Are”

Early bird registration must be postmarked by 8 March 2010 so this is your last chance to enjoy all the benefits of early registration: 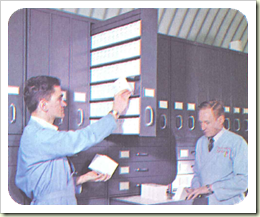 Cap’n! There By Microfilm Here!

By January 1964 the microfilm masters of FamilySearch (aka the Genealogical Society of Utah) had been moved to the new Granite Mountain Record Vault. Movement of the film processing laboratory to the vault would wait six months for construction of sewer lines. Dedication of the vault by FamilySearch sponsor, the Church of Jesus Christ of Latter-day Saints, would wait until June 1966.

The primary purpose of the vault was to safeguard the records from natural disasters including earthquake, fire, or flood, according to dedication speaker, President Hugh B. Brown, first counselor in the First Presidency of the Church. 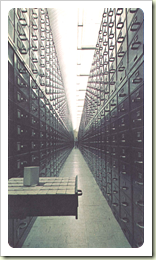 “President Brown said it was the desire of the Church to gather and preserve copies of the world’s genealogical information in a central storage area safe from the ravages of nature,” according to news reporter, George Scott.

Brown said, “Now, after more than 25 years of careful thought and planning and nearly five years of active construction work, these worthwhile purposes are being realized.”

The completed vault consisted of three long tunnels and several laterals, comprising 67,000 square feet. Construction cost about $2 million in 1966 dollars. At the time, the storage space was expected to fill in 25 years, leading to expansion further into the mountain. However, smaller microfilm and higher density storage cabinets have made expansion unnecessary.

Church president, David O. McKay said, “The vault is one of the great accomplishments of the Church and it is most important.”

Reminder: Who Do You Think You Are?

According to Ancestry.com spokesperson, Anastasia Tyler, “The idea for ‘Who Do You Think You Are?’ originated from a phenomenally successful UK show, which has traced the roots of some 50 individuals in the last 6 years. During the last season, more than 5 million viewers tuned in to watch the UK show. Nearly 12,000 Brits attended the Who Do You Think You Are? Live conference in February 2009. Of those, 84 percent said they started researching their family history since 2004. The show has generated a surge of family history interest in the UK—and the US version could net the same reaction.”