The irony is unmistakable. Ancestry.com is a company dedicated to helping people connect with their roots. Ancestry.com’s own roots lead back over 25 years ago to Ancestry, Inc., a genealogical publishing company. Last week, Ancestry.com, Inc. announced it is divesting its own roots, Ancestry Publishing.

Whether Ancestry Publishing is profitable or just less profitable than the Ancestry.com website, the result of the divestiture is the same: profitability of the remaining business goes up. And since stock typically trades at a multiple of earnings, the stock price goes up.

NamesInStone.com has announced the addition of a bunch of new cemeteries. The latest batch are in Uintah County, Utah. They have a nice website. I like the cemetery maps. They even allow corrections to most data. Unfortunately, they don't allow name corrections. That's unfortunate, since they misspelled my relative's name.

Profits may also be the motivation behind another recent announcement from Ancestry.com: they are discontinuing--again--free MyFamily.com groups (formerly known as family websites).

One has to wonder if the problem was the price or if people were just too dang confused. Either way, the liquidation of Ancestry Publishing makes one wonder if MyFamily.com will be far behind.

FamilySearch sponsor, the Church of Jesus Christ of Latter-day Saints, recently issued a letter to be read in all U.S. congregations, encouraging members to participate in the 2010 United States Census.

Ancestry.com, Inc. has announced the promotion of Eric Shoup to senior vice president of product. He now reports directly to Tim Sullivan, Chief Executive Officer. Previously he reported to Andrew Wait, senior vice president and general manager of family history. I wish I knew how much this change redistributes power inside the Ancestry.com (the company) world.

Some family history center (FHC) patrons were up in arms when a change at Footnote.com made it necessary to register for a free account before printing documents. The plan was to add a tab that explained why registration was a good thing, allowing users to save documents to a personal gallery for free access at anytime. When I tested Footnote.com at my FHC last Wednesday, I was able to print without registration.

I don’t quite know what to make of this one. According to an anonymous posting from a party claiming to be an Ancestry.co.uk affiliate, Ancestry.com was two months behind in paying a 4-figure monthly commission. He couldn’t get a reply to his phone calls but when he went public, Ancestry.co.uk quickly responded that an “invoicing technicality” had occurred and the check was in the mail.

FamilySearch recently presented Michelle Obama a copy of her genealogy. Seeing the news coverage was disappointing. A publicity photo provided by Senator Harry Reid's office shows Reid rather than Obama. Why? Even if it were a private meetings, cameras are usually present. The ABC TV affiliate in Salt Lake City cropped David Rencher, FamilySearch Chief Genealogical Officer, out of the picture. That wasn't the worst of it. They also misspelled genealogy. 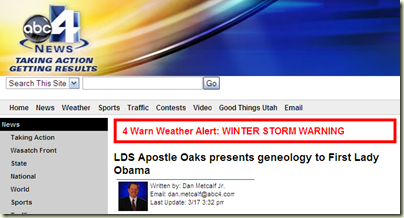 Can't you just see the harried editor?
“Stupid spell checker. That looks right.'”
If he clicked Add to Dictionary, then in the future…

Ancestry.com has released improvements to its member directory. The improvements allow members greater control when searching member profiles. With the improvements you can "find an advanced researcher who lives in Philadelphia, Pennsylvania, is focused on the Schultz surname of Western European descent, and speaks German," assuming that such a member exists.

FamilySearch volunteers have been indexing records for 30 years. Until the release of FamilySearch Indexing, the tool shouldering this work has been UDE (Universal Data Entry). A recent memo from FamilySearch parent, the Church of Jesus Christ of Latter-day Saints, announced the retirement of this grand old father of indexing. Starting last month no new UDE batches were to be distributed. All current work is to be completed and submitted by the end of August.

Most of the volunteers using UDE were retirees. Some took months of personal time to learn to use computers in general and UDE specifically. The memo warns that "Extraction Directors may need additional assistance from [Church] leaders during this challenging time in order to transition extraction workers."

The Ancestry.com Monthly Newsletter can now come to your online messages inbox, according to the Ancestry.com blog. Am I ever glad. I can't seem to get that thing through any firewalls. Even when working at Ancestry.com, there were some months the corporate firewall would eat it.

Ancestry.com has also added the ability to receive Member Connect Activity notifications in an RSS news reader. For more information, see “RSS Feed for Your Member Connect Activity.” For more information about RSS, don’t use the link provided by the Ancestry.com blog. Instead, look at Dick Eastman’s “RSS Feeds Explained.” By the way, the Ancestry Insider is available via RSS, should you decide to try out RSS news readers.