“You [are not] responsible for my mistakes and wrong conclusions,” [said Pip.]

“Not a particle of evidence, Pip,” said Mr. Jaggers, shaking his head and gathering up his skirts. “Take nothing on its looks; take every thing on evidence. There’s no better rule.”1

I’ve discussed the immaturity of the source summaries of Ancestry.com and FamilySearch.org. Today, I will examine the embryonic nature of their evidence management and their total lack of evidence summaries (the green boxes in the diagram, below). 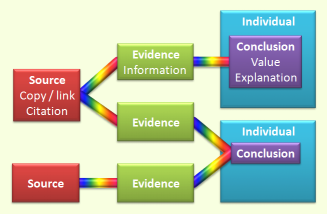 Evidence can be managed when
separated from sources and conclusions

Current genealogy programs lack separate treatment of evidence. Source summaries and records of individuals are left struggling to fill the gap. Some aspects are picked up by each, as shown in the diagram below. Contrast this with the evidence management diagram (above). 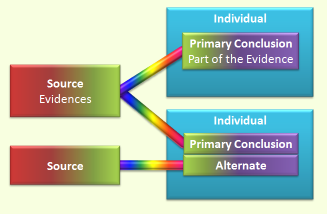 Current genealogy programs suffer because
evidence is not managed separately

One may well ask if it matters that users follow established research processes and proven techniques for evidence analysis. Consider the following:

Think back to the example in “Evidence Management Explained” where the month and day for the conclusion came from one source and the year came from several other sources. Compare the two diagrams above, while you think about these questions:

Further, when evidence is not managed separately from sources and conclusions: