Serendipity in Genealogy: The Lighthouse

It is as though our ancestors want to be found. Uncanny coincidences Olympian luck. Phenomenal fate. Tremendous intuition. Remarkable miracles. We call It, “Serendipity in Genealogy.”

“When my father was a young boy, he knew his grandmother,”  said Warren Porter. “And he knew her first name was Catherine and she had a connection in Maine.” But that was all they knew. A thick fog hung about Catherine, wife of Albert H. Porter.1

In the 1910 census,3 Warren discovered a tantalizing, albeit confusing clue. 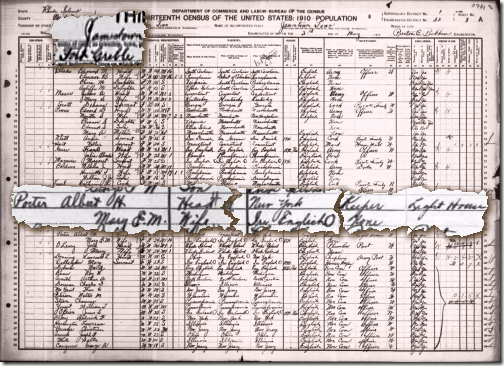 Warren found his great grandfather then lived at Fort Greble in Jamestown, Rhode Island. There, he was practicing the traditional family profession: Albert was the lighthouse keeper on Dutch Island.4

Confusingly, Albert’s wife was not the elusive Catherine, but an Irish woman named Mary. Less than two years after the enumeration, Warren’s grandfather was born. Could Mary be his real mother? Did she pass away soon after the enumerator’s visit? Were Catherine and Mary the same person? Was the Maine connection a North Atlantic red herring?

Utilizing the clue from the census, Warren and father contacted the Dutch Island Lighthouse Society. They traveled to the island several times. “We toiled for years to try to find any record of Catherine,” Warren related. They searched for a decade with no luck.

It was fitting that a visit to the lighthouse illuminated Catherine’s story. By chance, Warren’s uncle visited the lighthouse while the local paper was publishing a series about the keepers of the Dutch Island Light. By chance, he was there for the last in the series. By chance he noticed the article began with a name: “Albert Henry Porter.”5

The article contained the sad story of the years between the census and the birth of Warren’s grandfather. In the spring of 1911 Albert’s father died suddenly. It was perhaps during his travels to settle his father’s affairs that he learned of Mary’s. He confronted her when he returned and she confessed. She admitted to Albert “that before she married me she lead a fast life in New York for ten years.” She left the island in shame.

Albert took in his newly widowed mother and received permission to hire a housekeeper to help her. He turned to a domestic working for the fort’s doctor, Catherine Lyal of Maine.

The military soon lodged a complaint: “For some time Porter has been living in the lighthouse [with] a woman known as Catherine C. Lyal… During the time the woman has been at the Lighthouse with Porter she has had a child and the situation has become notorious.”

No wonder the family had been kept in the dark.

After the discovery, Warren noticed that Catherine Lyal had been hiding all along on the 1910 census, just three households away from Albert.

There she was, listed as a cook at the [Enders] residence and unbeknown to my father and I all these years, she had been the great-grandmother that we had struggled to find.  It seems sort of eerie to look at that form and know that infidelity would soon befall the lighthouse keeper of Dutch Island light.

(Special thanks to Warren Porter for sharing his story. Thanks, Warren! Do you have a story of serendipity that you can share? Send it to AncestryInsider@gmail.com.)