Can You Say “Surprise Child?”

Records Say the Darnedest Things: Can You Say “Surprise Child?”

I recently mentioned the sampler of the Chester Goodale family found in his Revolutionary War pension file. Upon examination the sampler includes a warning to researchers seeking all the children in a family. Chester and Asenath are married in August 1790. The children then come as expected, the first 8 months later, the second two years after that, and the third two years after that. The careless researcher might then give up, missing the last child, Phebe, who is not born for another 9 years. 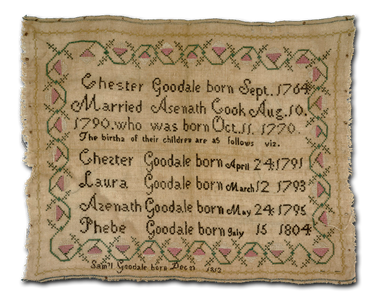 But it seems the Goodale family was not done yet. A closer inspection shows one last child, almost a family footnote, added below the strawberry and vine border. Samuel Goodale was born nine years after Phebe, when his mother was 43 (and two older sisters were in their child-bearing years).