Last Wednesday FamilySearch revised their beta.familysearch.org website. Yesterday I reviewed some of the changes in the library catalog. Today I’ll look at other changes. 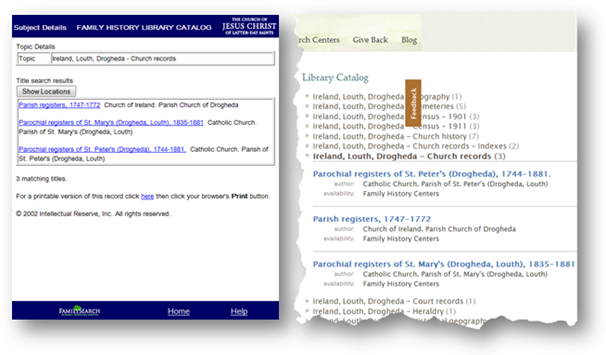 Unlike yesterday’s subtle alphabetizing error, here the beta catalog makes no attempt to alphabetize the titles.

I already mentioned yesterday the beta’s weird handling of narrow windows. That is the cause of the brown Feedback button in the middle of the window (above right).

Next I clicked on the parochial registers of St. Peter’s. The old catalog has the annoying habit of showing either title details or film notes. To see both, click to view the printable version (below, left). The new beta catalog displayed all the same information as the old catalog, including film notes, without the extra mouse click. 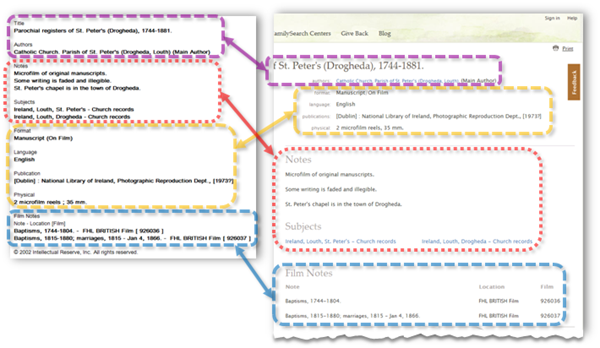 There you have it. The new beta catalog is not the loser that it once was. But FamilySearch is still seeking your feedback. Click the brown feedback button on the right edge of the window and let ‘em have it.

A brown bar (circled in yellow, below) separates close matches from partial matches. Made more obvious in this release is the preview arrow (a delta, really) to the right of each result. (See the examples circled in red.) Click the downward arrow to reveal the full content of the record (circled in purple, below) without leaving the results page. Click the upward arrow to re-hide it. 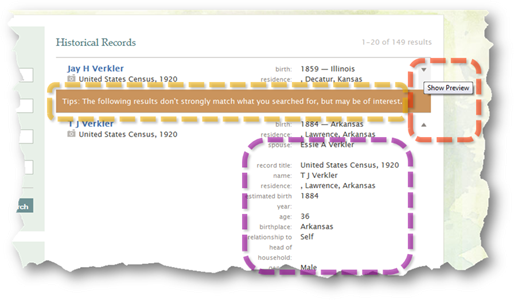 The Give Back page contains some familiar messages, and something new for FamilySearch.

Beta website revisions seem to be occurring about every four weeks. Slow, but sure, the beta is being readied to replace the old www.familysearch.org.

Don’t rush to conclusions because previous versions were wanting. Rush to beta.familysearch.org instead. Get on. Try it out. Leave feedback. Then stay tuned…