In the old catalog, if you click Help in the bottom right corner and scroll down to the bottom of the help, you will see that the catalog user interface was OCLC OLIB WebView. While it was state-of-the-art when first introduced, it has gotten long in the tooth, lacking many of the features we enjoy in other online catalogs. And the look-and-feel never matched the rest of FamilySearch.org.

It looks like this time FamilySearch is implementing their own user interface. This gives FamilySearch much greater control of the design, and can be significantly cheaper. However, not purchasing the software from established experts means you may not understand all the nuances involved.

The library catalog released during this year’s NGS Conference was way worse than mere ignorance of nuance. Because I don’t know, I can speculate that what we saw was rushed to market just for the conference. Unfortunately, some users subsequently rushed to the conclusion that the beta catalog could never replace the old one.

With last week’s beta release, FamilySearch revisited the catalog in a major way. It looks to me like FamilySearch carefully examined how patrons use the old catalog and have reproduced its functionality plus some. Hopefully, users will also revisit the new catalog.

The same familiar search types are present. The old catalog took one click to start any search type. The beta catalog takes no clicks to start the most important search type: place name. Other searches require two clicks. 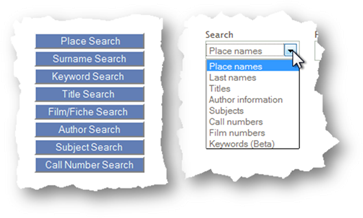 Place name searches have benefited from advances in web technology. In the old catalog I searched for “drogheda” and got the results shown below, left.

In the beta catalog as I typed each letter the catalog displayed matching locations. By the time I had typed “drogh” the catalog was displaying Drogheda as 1. a county town in Ireland, 2. a town in county Louth (the FHLC’s treatment), 3. the Drogheda hamlets of Colpe, and 4. Duleek (see above, right). That’s a nice feature.

I selected the county town to see what the beta catalog did with the “see” references in the old catalog. Oops. It did nothing (below, right).

I also found the beta catalog didn’t handle narrow windows (above, right) like the old catalog (above, left). That is a minor annoyance unless no results are found. Then the “No records found” message does not show up without scrolling to the right. (I doctored up the graphic above so the message would show.)

I circled back around and selected “Ireland, Louth, Drogheda” in both catalogs. FamilySearch has gone back to the familiar record type results! Yay! And they’ve one-upped it. Each record type is followed by the number of matching titles. Nice. The text size of the results is larger and dropping the underlines makes the results much easier to read. Very nice. 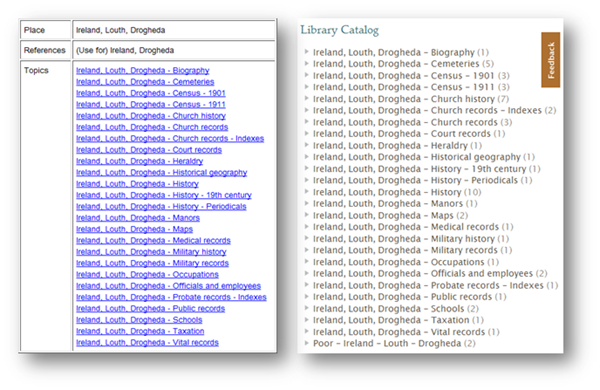 The beta catalog included all the same record types as the old catalog plus one more, “Poor – Ireland – Louth – Drogheda.” That’s intriguing.

Here I ran into what may be a cataloging nuance overlooked by FamilySearch. The beta catalog lists some of the results in a different order than the old catalog. “History – Periodicals” appears before the shorter phrase, “History.” Be careful. This mistake raises the possibility that FamilySearch has overlooked other cataloging conventions.